On the road again...

Oh, what a week it's been! I had such good intentions of starting the new year off right - clearing off the counters and my office, reviewing 2008, and setting new goals for 2009. It's all had to be put on hold.

My great-uncle died this week. He was 92 and died peacefully in his sleep of late-stage Alzheimer's. He lived a good, long life, so that makes his death a bit easier to bear. We've lost many family members to cancer in the past few years, and those were much tougher.

I've somehow become the family chronicler of life and death, ever since I first made a commemorative DVD of photos after my godmother's death a few years ago. So, my mother and uncle have been sending me pictures, and I've been scanning and creating a DVD this week. As my uncle said, we're all getting just a little too efficient with this process. So, 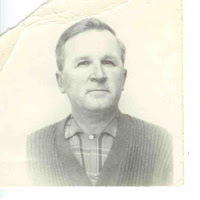 I have to really hustle today to finish the photo slideshows. We leave tomorrow morning for Rochester (an 8-hour drive) for the funeral. My husband is not too thrilled to be driving to western NY (i.e. the snow belt) in January. He's a southern boy.

Here's a classic story of my Uncle Charlie: After he got Alzheimer's, he was living in assisted living, and we tried to visit whenever we were in Rochester. So, about 5 years ago, we picked him up and spent the day with him. We went to the zoo (he used to love to walk) and took him out to lunch and had a very pleasant day together. The next day, my uncle called him and said, "So, did Sue and her family come to visit you yesterday?" And my Uncle Charlie said, "No, Sue wasn't here, but I spent the day with a really nice family!" Obviously, that's the Alzheimer's talking (we DID re-introduce ourselves when we first arrived), but it also shows the kind of sweet, happy way that my uncle approached life. He had no idea who we were but enjoyed spending the day with us! He loved life and had the greatest laugh. Not a bad legacy to leave behind.
Posted by Sue Jackson at 9:22 AM

Email ThisBlogThis!Share to TwitterShare to FacebookShare to Pinterest
Labels: family