I thoroughly enjoyed my day today, a day that would be considered very ordinary to most people. Other than my afternoon nap, it was simply normal. After the past two difficult months, normal was very nice.

I went into my son's third grade classroom this morning to participate in their Breakfast Buddies program. It was the first time I've been able to help out in Craig's class this year. What a thrill!

Jamie was home sick today, but so were some of his friends. This may actually be a garden-variety cold. This afternoon, I took him to the doctor for his annual physical. He's now 5' 3" - no longer any doubt that he's passed me up!

The most amazing thing about today was that I was able to interact with other people in such a normal way. I didn't notice a single CFIDS symptom all day, so I felt well enough to chat with the other parents in Craig's class and trade pleasantries with the receptionist at the doctor's office. That kind of ordinary interaction with other people is what I miss most. 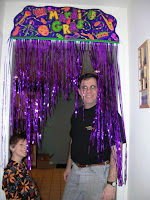 We used to live in New Orleans, and Mardi Gras is still a major holiday for us! This year was scaled back considerably, though. With Mardi Gras weekend falling right on my niece and nephew's birthdays and the uncertainty of my new anti-viral treatment, we made the difficult decision to skip our traditional party. Even in its abbreviated form, it would have been too much for me this year. Ken had to go out of town this week for work, so he's not even here to celebrate Mardi Gras day with us. 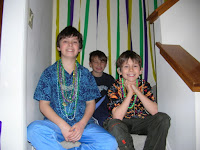 The boys and I are still celebrating, though. They had green, gold, and purple sprinkles on their oatmeal this morning and wore their "party shirts" to school with some Mardi Gras beads. Tonight, we're heading over to our friends' home for our annual Mardi Gras feast of Popeye's chicken and red beans & rice, with bread pudding and King Cake for dessert. Mmmm!

I'm doing quite a bit better than the last time I wrote here. My bronchitis cleared up with the antibiotics. It's now been a full month since I started Valcyte, and I'm generally doing pretty well. Still too early to tell if its the treatment or the usual CFIDS fluctuations. 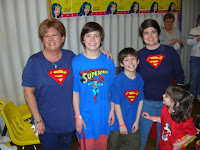 y in far better shape this weekend than a year ago. We traveled to Connecticut for my niece's 5th birthday and my nephew's 1st birthday. My Mom noticed how much better I handled the noise and chaos of a preschool birthday party this year. It was a Superman/Wonder Woman party - as always, my family got into the spirit of the occasion (that's my Mom, my sons, my niece, and me)! I was actually able to enjoy myself this year.


So, check out the great photos, videos, and live webcams at Nola.com for a little taste of the festivities. Laissez les bon temps roulez!
Posted by Sue Jackson at 4:31 PM No comments:

Another lost week. I caught Craig's bronchitis, and it completely knocked me out this week. Plus, Craig's infection recurred, and Jamie had a 1-day crash. I was so sick that I spent 3 days in bed. On Wednesday, both boys were home sick, and I pretty much ignored them (they watched way too much tv!).

So, I'm on Zithromax, and Craig is back on it. The boys are both back in school (just in time for the weekend again), and I'm doing a lot better, though still kinda crummy with really low stamina.

I saw my doctor on Tuesday when she diagnosed the bronchitis. Of course, this infection muddies the waters and makes it difficult to tell what, if any, effect the Valcyte is having. I talked to her about dosing, and she said this is as high as she feels comfortable going. I had my labs done today, so we'll see what they show. I will probably refill the Valcyte for one more month to give it some more time, unless my doctor sees something alarming on my blood tests.

Now that I'm out of bed, I feel so overwhelmed. There are stacks of paperwork everywhere (bills, school stuff, mail), about 80 e-mails in my inbox, and so many writing projects waiting. For the past 6 weeks, I feel like I've been in survival mode, every day just focusing on getting over the next hurdle, never able to move forward or get much done. I know it's this way for everyone with CFIDS (and plenty of healthy people, too!), but it's been especially bad for me since January 1.

My next hurdle is another half day of consulting on Monday, so I'll need to take it very easy this weekend (again) to make sure I'll be able to do it. Then, I'll need to recover quickly because we're driving 5 hours to my sister's house next weekend for my niece and nephew's birthdays. It'll be a busy, chaotic, crowded weekend, so I'm worried about that, too!

Whew, where did the week go? Both of my sons were home sick this week, so it was almost impossible to get anything done. Craig had bronchitis; Jamie had your run-of-the-mill CFIDS crash. Both are doing fine now. They went back to school yesterday, just in time for a 4-day weekend! This is the first crash Jamie's had since mid-October, and he only missed two days of school this time. Absolutely amazing compared to how sick he was last year.

So, I'm sure you're wondering whether the Valcyte is working for me. I'm wondering, too! I've been on it for two weeks now. From what I'd read, I was expecting a sudden worsening of my symptoms as an indication that the Valcyte was working (this is called a herx reaction, common when treating a long-standing infection). I felt pretty crummy for the first week and a half, with really low stamina. I couldn't really tell if this was my "worsening," though, since I'd been in a crash since January 1. Yes, it was worse than "normal" for me but not much different from how I'd felt all month. I was feeling a little down, thinking I'd had no reaction to the medication at all, and it wasn't going to help me.

Then I began exchanging information with other CFIDS patients on Valcyte. THANK YOU to all the people who told me about the message boards at Immune Support!!! Reading about other people's experiences and other doctor's approaches has made a huge difference for me. If you're interested, there are several discussion threads specifically about Valcyte and other anti-virals. You have to register, but it's free and quick.

One thing I learned is that Dr. Montoya is using a much higher dose of Valcyte in the Stanford trials than I'm on. At first, I worried that my dose was too low, but I've learned that some doctors are using lower doses to try to minimize the initial worsening. I'm also wondering whether a lower dose might be appropriate for me since I'm not as severely ill as most of the people Dr. Montoya is treating. I've had CFIDS for just under 5 years and function at about 40-50% of what I could do before getting sick. It's bad, but I know that there are plenty of people with CFIDS who are much sicker, even bed-ridden. I've also done a lot already to help improve my immune system function, which could help me to better tolerate the anti-viral treatment.

So, bottom line is that I'm still not sure whether the Valcyte will work for me. I had three very good days (in a row!) this week, but I'm crashed today after a shopping expedition yesterday. Next week, I'll go to the lab for blood tests to monitor how I'm reacting to Valcyte, and then the week after, I meet with my doctor so we can decide whether to continue the treatment. After what I've learned this week, I'll also talk to her about the dosing.

If you're interested in learning more about treating CFIDS with anti-virals, Dr. Martin Lerner is another doctor who's done a significant amount of work in this field. His website includes an excellent summary of his research (click on Professional Publications).

So, I'll rest up today and hope for a decent weekend.
Posted by Sue Jackson at 11:07 AM 2 comments: