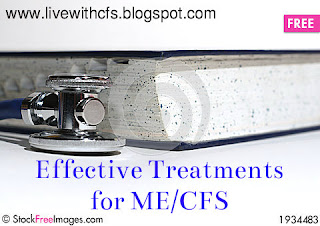 While Mast Cell Activation Disease (MCAD) is a well-known but rare condition, doctors have only just recently discovered that a related condition, Mast Cell Activation Syndrome (MCAS) is actually very common and behind many unexplained medical problems. Since mast cells are a part of the immune system (involved in allergic reactions), doctors and other medical professionals are discovering that many patients with immune disorders, like ME/CFS, or tick infections, which can affect the immune system, also have MCAS. Any kind of unexplained or new allergic-type reactions, rashes, pains, or weird symptoms that don't seem to fit anything else often point to MCAS. 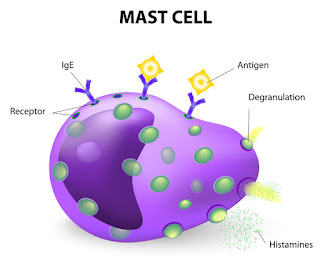 The good news is that MCAS is often easily treated with readily available over-the-counter (OTC) medications and supplements. First-line treatments usually include OTC antihistamines and acid blockers, as well as other allergy treatments. Testing for MCAS is tricky because changes in the blood are often transient, so a single blood test may not catch them, but since the initial treatments are inexpensive and accessible, it can be worthwhile to try treating MCAS if your symptoms fit. Many of the parents in our Parents' support group have reported that their kids with ME/CFS, EDS, tick infections, and related conditions have responded well and improved--some dramatically--with some simple MCAS treatments.

Below is a bit more detail on MCAS, its diagnosis, and its treatment. Most of what I've learned about it has been from the book Never Bet Against Occam: Mast Cell Activation Disease and the Modern Epidemics of Chronic Illness and Medical Complexity by Dr. Lawrence B. Afrin, M.D., one of the main doctors responsible for identifying MCAS. His book contains many case studies of widely varying patients, including some information on diagnosis and treatment options, with a lengthy glossary (view the book on Amazon at the link). I also learned about MCAS from a few websites and from other patients and medical professionals.

Our Story
Our registered dietician (who also has an MS in biochemistry and is brilliant about ME/CFS and related conditions) mentioned the possibility of MCAS to me several years ago, but I didn't pay much attention. Then, I began to hear other patients talking about it, with more and more people diagnosed with MCAS and improving with treatment for it. Finally, when both our ME/CFS specialist and our Lyme specialist mentioned it to us within a month's time, I decided it was time to follow-up on it.

I have had annoying-level year-round allergies since we moved to Delaware in 1990--mainly to molds and dust--and developed a dairy intolerance when I got ME/CFS (as do 30% of ME/CFS patients). My older son, who also has ME/CFS plus 3 tick infections, also developed a dairy intolerance with ME/CFS but otherwise has only mild allergies and seldom even needs to take OTC antihistamines...which is why I didn't pay attention the first few times I heard about MCAS. He and his brother (who is recovered from ME/CFS but has fairly severe allergies) had both started reacting to certain fruits, vegetables, and nuts,  in the past few years (a condition known as Oral Allergy Syndrome), but again, for our older son, it's been mild.

Then, last spring, he had a random, unexplained anaphylactic reaction one day after playing soccer. He does carry Epi-Pens due to a bee sting allergy, but he definitely had not been stung that day. When he felt his throat start to close up, he walked to the nearby Urgent Care clinic (luckily, very close by), and phoned my husband, who rushed over there. Luckily, with the quick response and some Bendaryl (an OTC antihistamine) and a dose of steroids, he responded and didn't need the Epi-Pens, though he was wiped out for days afterward. But we still couldn't explain why it had happened.

A couple of weeks later, we were at a check-up with his Lyme doctor and just mentioned the weird, still-unexplained anaphylactic reaction. Our Lyme doctor said that it sounded like a mast cell problem, and finally, the light bulb went on for me! I started remembering all the disparate things I'd heard or read about MCAS and realized his strange reaction was a major sign. We took our ME/CFS specialist up on her offer to test us both for MCAS, and she ran a range of tests (see below, under diagnosis). Nothing showed up abnormal for me, but one test was way out of range for our son, so we began trying treatments. There hasn't been a huge change, but he did see a small improvement in his symptoms and how he felt overall. More importantly, he hasn't had another anaphylactic reaction since then, though he does still have a mild mouth-itching reaction to certain fruits. I didn't expect any major changes for me and didn't see any, though it has helped to better control my allergies, which are ever-present.

Diagnosis
Diagnosis of MCAS is challenging. There are some blood tests that can be run, but none of them is foolproof: you can have perfectly "normal" results and still have MCAS. It is a condition that is mostly diagnosed clinically (that is, through symptoms, history, and physical exam), though lab tests might pick it up (very much like Lyme disease).


These lab tests (all for blood unless otherwise noted) might be helpful and can be requested to help determine if MCAS is present:


As I mentioned in the introduction, there are many problems with these tests. The tryptase test, for instance, has an inherent impracticality. It is most accurate when the blood sample is taken within 4 hours of the onset of a flare-up of symptoms ... but few patients are able to get to a lab and get it tested in that timeframe. Other MCAS/MCAD testing requires a sample that is kept chilled, which is also difficult to ensure once it is shipped off to a lab somewhere.

For us, my tests were all normal, as were most of my son's, but his IgE levels were more than 6 times higher than the normal range. IgE are the antibodies produced by your immune system when you've been exposed to an allergen, so this was an unusual result for someone who rarely has typical allergy symptoms.

There are more accurate and more complicated tests for MCAD and MCAS, but they are typically beyond the knowledge of most doctors or laboratories to request and/or correctly run.

Since the testing doesn't always (or even often) pick up MCAS, doctors must rely mainly on symptoms. Classic signs of MCAS include:
This is where the title of Dr. Afrin's book comes from. He explains that Occam's Razor tells us that a multitude of problems (especially unusual problems) in a single patient is far more likely to be due to a single root cause than to multiple causes.

Treatment
So, if you and your doctor suspect MCAS, based on symptoms and/or testing, the easiest way to confirm is not with more complex testing but to try some simple treatments.


Dr. Afrin's book covers other treatments, but these listed above are the most commonly used and readily available. He does sometimes use simple aspirin to treat MCAS (as one of several treatments), but it does have some potentially serious side effects when used regularly.

From this list, my son and I both take Zyrtec (double dose for him) and Quecertin ( 2 pills twice a day) daily, as well as an acid blocker/H2 blocker. We started with Zantac and switched to  Pepcid-AC when Zantac was recalled. Note that there is no way to predict which particular medication in a category will work best for each individual. Everyone is different. So, some patients will respond well to Allegra, while other will have better success with Claritin or Zyrtec (and same with the H2 blockers and other categories) - it's a matter of trial and error. My son also tried ketotifen, 1mg daily, compounded, though he didn't see any change from that. He tried the liquid Cromolyn, but it gave him diarrhea, though I have heard that it works well for other patients.

As for results, my son reports that his food allergy symptoms (itchy mouth and throat with certain foods) have improved, and he hasn't had another anaphylactic reaction. My allergy symptoms are definitely better controlled now; I already took Zyrtec daily but adding Quecertin has helped.

The bottom line with treating MCAS is that it comes down to trial and error, which means plenty of patience and persistence. You have to keep trying to find the combination of treatments that work best for you, and even within a single category, what works for you may not work as well for someone else.

Believe it or not, that's a brief summary! For more detailed information or to learn more about the science, check out the Mast Cell Action website or Dr. Afrin's book. MCAS is a complicated topic but one that is an exciting new development for many with immune disorders, including ME/CFS, and potentially a whole new avenue of treatments to try. We do think treating MCAS is helping our son, and I think it has helped to reduce my own allergy symptoms a bit more. I know of other patients who have improved dramatically with treatment for MCAS, so it is definitely worth looking into. Now, whenever someone tells me that they or their child has "a weird rash" or some other unexplained symptom, I always point them toward MCAS.

Have you looked into MCAS yet or tried any treatments for it? What has your experience been?

Note: This post contains affiliate links. Purchases from these links provide a small commission to me (pennies per purchase), to help offset the time I spend writing for this blog, at no extra cost to you.