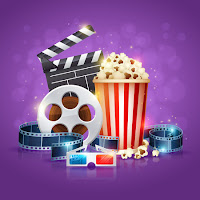 Here is the full list of movies I've reviewed, organized alphabetically within genres, with links to reviews. Our favorites are marked with a *. My reviews never include spoilers!