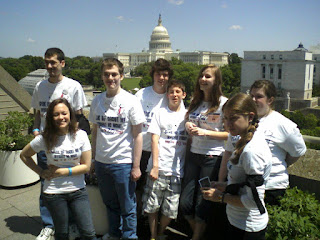 Sorry for the delay in telling you abut the CFSAC meeting - Blogger has been down, in "read-only" mode for two days!  Very frustrating.

So, yes, we did go to Washington, DC, on Wednesday along with about a dozen other families - lots of parents and teens there - as a part of the Speak Up About ME campaign.  It was a very moving experience.  Here's a picture of the teens that were there - all with ME/CFS.  Many of our local group were there among them.

We were first to give our testimony at the start of the afternoon session, followed by many other parents and even a couple of brave teens who gave their own testimony.  I cried through the whole hour!  It was very moving, especially hearing the teens' own words.  I highly recommend listening to the full hour - go to this NIH link, click on the video for May 11, and the public comment period starts at hour 4 and goes until hour 5 (you can also download it as an MP3).

If you're not up to listening to a full hour but would like to hear our 5-minute testimony, here it is:


Important note: my husband Ken was right there with me, sitting next to our youngest son, Craig, but they completely cut him out of the video!  If you look carefully, you can spot his arm.  I just wanted you to know he was there with us, one of only two dads.

After the public comment period, we all left to go visit our Congressional representatives to ask for more equitable distribution of research funds.  We pointed out the huge disparity in the amount of research money devoted to ME/CFS compared to other, similar illnesses, especially given that ME/CFS affects far more people than the comparison illnesses.  We also asked that they help to ensure that the CDC and NIH finally take action on the items they've promised for years, including establishing centers of excellence for research and patient care for ME/CFS.  I don't know about everyone else's meetings, but ours went well, and the staffers we met with seemed truly interested and sympathetic.  I think having the kids there really made an impact.

The best news of all?  Our efforts are already beginning to pay off.  At the end of the meeting, CFSAC discussed pediatric ME/CFS and talked about setting up a database to begin assessing how many kids and teens in the US have ME/CFS.  They also agreed to set aside time in the next meeting to learn more about pediatric ME/CFS from expert speakers.  Also, Dr. Leonard Jason says he's already working on a grant to study pediatric ME/CFS.

As a side benefit, I've gotten some great feedback from my family and friends.  Every year for ME/CFS Awareness Day, I send out some sort of information to my family and friends, and usually I don't get much response.  But this year, sharing the video of our testimony has resulted in an avalanche of support and questions!  If nothing else, I've educated the people around me.

Craig was wiped out, but rebounded by 10 am yesterday, so he could go to school mid-day.  Jamie and I are still crashed, but we feel it was worth it!
Posted by Sue Jackson at 4:32 PM

Thank you so much for sharing!

I watched parts of each day and it was truly emotional! I couldn't finish all of the public sessions because it was too emotional for me at the time. It was great to hear you share part of the story of your boys.

That is so great to hear! Not only will there be positive action happening, but you also got great support and questions from others you know!

That's so great, Sue! I was sort-of disheartened by the lack of May 12 activity, but you seem like you really got out there and made some noise. And so did your kids! Thanks to everybody.

IAmMe - thanks. I totally understand abut not being able to watch it all at once. I was sobbing in the meeting, and one mom and dad had to leave the room during the public comment. It was very moving.

Lee - The dearth of online activity yesterday may have been partially due to Blogger being unavailable all day - no one could post blog posts on Blogger or leave comments on Blogger-hosted blogs. Plus, for us, we were exhausted from the CFSAC meeting! Lots of key people were at the meeting, so that might have impacted yesterday, too.

Hi Sue,
Thank you for posting, by the time I got on the computer to watch live - it was too late here on the west coast. Glad to see the kids!! Very emotional to say the least. Glad that NIH is considering funding pediatric studies. My son is now off Valcyte and unfortunately a nonresponder overall. Looking into other possibilites for his health. I hope these NIH members understand that there are many kids who couldn't possibly travel, my son is housebound. It would have been way too much for him to get there.
Much Love and Wishes for Better Days Ahead...Keep up the good fight!
TwoBoysMom

Sorry to hear Valcyte didn't work for your son. Anti-virals have helped me a tiny bit but didn't have a big effect. Is he receiving treatment for OI? That typically helps teens and kids more than anything.

This committee DOES understand how many people (kids and adults) could never make the trip to a CFSAC meeting. One important thing to recognize is that this group is on our side - it is made up of some of the top doctors and researchers in the ME/CFS world. They see patients and they understand how bad ME/CFS can be. The trick is for the NIH and CDC to accept this committee's proposals and actually DO something. This meeting included some top-level people from NIH who seemed very receptive and understanding of the the need for action. Things have definitely changed from 5 years ago and are continuing to move forward.

Sue - thank you so much for your heroic efforts in getting your whole family to the CFSAC meetings. I am very encouraged to hear the response of people who were at the meeting at that time.