My younger son was home sick for three days last week (crash caused by a viral trigger) which would normally mean lots of movies, but he was only in the mood for TV!  He was on a History Channel kick, watching endless episodes of Pawn Stars, Storage Wars, and American Pickers.

We had a very busy weekend but did find time in the evenings for some movies: 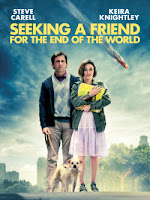 Saturday night, my husband and I watched Seeking a Friend for the End of the World, a very unusual sort of romantic comedy starring Steve Carell and Keira Knightley.  The movie opens with a giant meteor hurtling toward the earth, with a last-ditch effort to stop it having failed.  So, yes, the “end of the world” in the title is meant literally, as the entire population of the earth prepares to die in three weeks.  Carrell’s character, Dodge, is his usual sort of mild-mannered, dull guy who works as an insurance salesman and whose wife left him when the big news was announced.  Sounds sort of depressing, doesn’t it?  Oddly, though, it has its funny moments (mostly dark comedy, as you can imagine), and at its heart, it is a warm, touching love story.  When rioting chases him out of his city apartment (New York, I think), Dodge decides to set off on a mission to find his high school sweetheart who recently wrote him, saying he was the love of her life.  On his way out, he teams up with his quirky neighbor, Penny (played by Knightley), in order to save her from the riots.  They end up on a very strange road trip, encountering all sorts of odd things as people all cope in their own ways with the projected end of the world.  Overall, we really enjoyed it, and it has a great soundtrack. 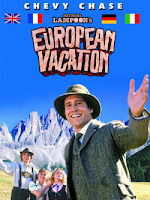 Sunday night, our 14-year old son chose the movie:  National Lampoon’s European Vacation.  We recently introduced him to the classic comedy, Family Vacation, and he does enjoy silly comedies!  It was as expected – lots of goofy, predictable jokes but funny nonetheless.  Lots of laughs and not a single redeeming feature – just a bit of escapist fun to end the weekend.

Ken and I are kind of at a lost on weeknights, since we caught up with both The Good Wife and Treme on DVD.  We are enjoying Elementary and Perception.  And we watch Revolution, Bones, and Glee with Craig before he goes to bed.  Any other good TV shows we should check out?

Have you seen any good movies lately?
Posted by Sue Jackson at 5:41 PM

We've been watching Christmas films trying to get ourselves into the mood, we love ELF, Just the right amount of silliness and Christmas!
Do you like period dramas? The bbc just did one called 'the paradise' don't know if you guys get that over there, but it's one to watch if you do :)

I've seen quite a few really good movies lately. Possession about two poetry scholars falling for each other while trying to solve a mysterious affair between two Victorian era poets. A fun chick flick. I finally got to see The Artist which is simply brilliant and is a must see. I saw Water which is more melancholy. It is about a small girl that ends up in an Indian Ashram after she becomes a widow. We rented Snow White and the Huntsman which was surprisingly good. Lots of spectacular CGI. Even hubs enjoyed it. And I've started watching Star Trek Deep Space Nine from the beginning.

Thanks for all the recommendations! I wrote them all down for future reference!

Ken and I used to watch every episode of DS9 - loved it. Not quite as good as TNG but a close second ;)

I think it was the time period that DS9 aired that caused me to miss many episodes. My son was born in '93 and I wasn't watching much TV during that time frame. I got sucked into Babylon 5 and made a point of seeing that but other shows I caught when I had time. I have found watching TV series from beginning to end a lot of fun and I'm glad I've had the opportunity to do so.