My son, Craig, is still pretty much incapacitated - knee surgery and a second sinus infection have triggered a severe CFS flare-up, way beyond what he usually experiences, so we have been watching lots and lots of TV and DVD's!

Like comfort food (which I have been making a lot of!), Craig likes comfort movies - old movies (especially comedies) he has watched dozens of times before. Perfect when you are on pain killers, right?  Last week, he watched (again) Napoleon Dynamite, The Birdcage (one of the funniest movies ever made), Mrs. Doubtfire, RV, and Grown-Ups (several times!). 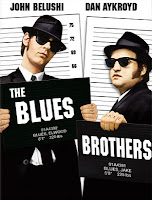 This weekend, Ken and I finally got him to watch a movie he'd never seen before, The Blues Brothers. Can you believe I've never seen it before either? It was released in 1980, and I had the soundtrack album in high school, but in 30 years, I'd never seen it. This may sound silly, but I didn't realize it was a musical! I really enjoyed it, especially the musical guest stars/cameos, like Aretha Franklin playing a diner owner who suddenly starts belting out "Think" or Ray Charles as a blind music store owner who sits down at the keyboard and pounds out a classic. Even Craig was excited to see the real Cab Calloway sing and dance (his school shares a building with the Cab Calloway School of Arts). This movie is just a lot of fun - music, dancing, and comedy by an all-star cast.

I also brought home a bunch of old sitcoms on DVD for Craig. So far, he loves Mork & Mindy and Roseanne (I knew he'd like seeing three cast members from his favorite The Big Bang Theory).

Ken and I have discovered a new show, The Americans (FX), about a typical surburban couple in 1981 with two kids who are really undercover Soviet spies. It's excellent (though quite violent) with a good sound track. The only problem was that after watching the first episode, I dreamed about fighting off spies all night. In my dreams, of course, I was paralyzed and couldn't scream, so I kept waking Ken up in the middle of the night with little squeals and squeaks as I struggled to get away and scream!  Ah, the joys of CFS, huh? I usually avoid watching anything suspenseful before bed, but this was just so good!

Have you seen any good movies or TV shows lately?


(If you are interested in what we are reading this week, check out the Monday post on my book blog.)
Posted by Sue Jackson at 6:30 PM

Having a quiet week myself... So these recommendations are just arriving at the right time. So many good choices.

Hope your son perks up soon.