Ah, yes, running behind as usual! We had a lovely weekend camping - very relaxing - but re-entry has been tough. More on that later. For now, I thought I'd tell you about the movie we watched last week, before it's next week! 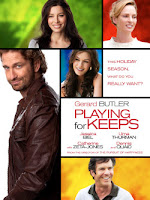 My husband was home from his business travel last week, but he had dinners for work 3 evenings! So, my 15-year old son, Craig, and I were still on our own a lot. Thursday, we did an easy evening - got take-out for dinner and rented a movie, Playing for Keeps. Craig wasn't sure about it at first, but we both ended up enjoying it. It's the story of a professional soccer player named George who has retired and is now an out-of-work soccer player. He's moved to Virginia to be close to his son and his ex-wife (played by Jessica Biel), whom he still hopes to patch things up with, but when he arrives, he finds that she is engaged to marry someone else. Somehow, George gets roped into coaching his son's soccer team, and the moms all go crazy for the handsome soccer player with the Scottish accent. With all that unwanted attention, George has trouble staying on track, but is determined to spend time with his son and win back his wife. It's basically a romantic comedy, but with a fairly unique (though not all that realistic!) plot. Craig and I both enjoyed it, with plenty of laughs, a great cast (including Dennis Quaid, Uma Thurman, and Catherine Zeta-Jones), and some good soccer scenes.

When my husband came home from his dinner, we told him about the movie, and I asked if that's what coaching our sons' soccer has been like for him - constantly fending off the predatory moms who just want his body! He said it's been just like that ;)

Have you seen any good movies lately?
Posted by Sue Jackson at 4:15 PM

Ha ha! I'll have to make sure my hubby doesn't become a coach ;)

Have you ever watched salmon fishing in the Yemen? I watched that this week and enjoyed it. Nothing spectacular, but easy going and lighthearted.

Yes, we have seen Salmon Fishing in the Yemen, Jenny, and we both liked it. Glad you enjoyed it, too.