I had a very rare weekend to myself, with my sons off to the beach with friends and my husband helping his Dad move out here. I rested and recuperated, caught up on a few things around the house, ate take-out, read a lot, and watched a couple of movies my husband wouldn't have wanted to see! 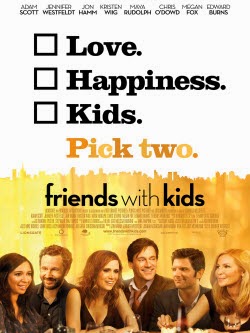 Saturday night, I watched Friends with Kids, a romantic comedy that hit the theaters last year. Jennifer Westfeldt stars as Julie (she also wrote and directed the film!), a woman living in Manhattan who can't seem to find the right guy. She hangs out with her lifelong best friend, Jason, as well as two married couples they are friends with (two of the four friends are played by Jon Hamm and Maya Rudolph). After both married couples have kids, Julie feels her biological clock ticking, so she and Jason decide to have a baby together, as friends. They think they've beat the system, as they happily glide through the baby and toddler years while their friends' marriage seem to be falling apart. But the ideal world doesn't last, and things get complicated when Jason begins seriously dating a young dancer and Julie gets involved with a handsome divorced dad. Although the ending is somewhat predictable, if you've ever seen a romantic comedy before, the movie is still very well done and original, with plenty of laughs and drama both. I enjoyed it. 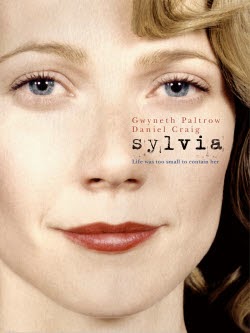 Sunday night was a bit darker, movie-wise. I watched Sylvia, a film about Sylvia Plath, with Gweneth Paltrow in the lead role. So, yeah, you know how this one ends, and it's not a happy ending, right? True, but it's still an excellent movie. Paltrow is mesmerizing as Plath at all her ages and in all her moods. I haven't read any Plath before, but I know all about her (who doesn't, right?). It's interesting to see behind the scenes into the life of this literary icon, from her life as a Fulbright Scholar at Cambridge to her marriage to famed poet Ted Hughes to her time as a mother and her downward spiral further into depression and eventually suicide.  So, if you think that might be too disturbing to you (my husband would have hated this one!), best to pass it up, but if you are interested in knowing more about the famous poet and novelist and want to see her skillfully brought to life on the screen, then this is the movie for you.

Have you seen any good movies lately?
Posted by Sue Jackson at 8:28 PM