My son and I eat a Paleo diet for medical reasons - it is supposed to be the best diet for those with immune disorders. Paleo means no diary, grains, or legumes and only natural sugars. We are both supposed to avoid all sugars (even natural ones), as well because of our chronic yeast overgrowth. So, I really miss baked goods and especially desserts. 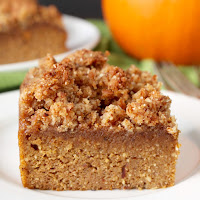 Last week, a friend of mine posted a link to a recipe for Paleo Pumpkin Coffee Cake on Facebook, and I immediately clicked the link and printed the recipe. I made it yesterday and took it to a potluck dinner for our local ME/CFS group, where it was gobbled up! It's really delicious, and my son said it tasted like fall. I agree!

Even if you don't eat Paleo per se, this recipe is dairy-free and gluten-free, as well as low in sugar, so it's healthy for all of us. Food intolerances are very common in people with ME/CFS, and a recent study showed a full 30% of patients with ME/CFS were dairy intolerant. When I eliminated dairy about 12 years ago, my GI symptoms disappeared. Plus, many of us should be avoiding grains and sugars because chronic yeast overgrowth is very common in ME/CFS due to the immune dysfunction (and believe me, it can make you feel awful!)

The recipe is from the blog Jay's Baking Me Crazy, which I had never been to before. You can read the full blog post, see lots of photos, and print a nice copy of the recipe at this link: Paleo Pumpkin Coffee Cake. I don't have any of my own photos because there is nothing left but crumbs! Amazingly, though, it came out looking just like her photo, which is a rarity for me.

I made a few small changes to reduce the sugar content. I cut the maple syrup and coconut sugar in the cake both in half and added in 2 teaspoons of Stevia.  For the crumb topping, I used just 1 Tablespoon of maple syrup with 1/2 teaspoon of Stevia. So, that is a lower-sugar option.

BONUS: I had some canned pumpkin left after making the cake yesterday, so this morning we had Paleo Pumpkin Pancakes with Bacon and Pecans for breakfast, a recipe from Against All Grain, one of my favorite sources for Paleo recipes - mmmm! (Once again, I subbed 2 teaspoons Stevia for the honey called for in the recipe - that was for a half a recipe.) It's been a fall pumpkin cooking bonanza this weekend!

If you are looking for other Paleo recipes, click on the Paleo category below or in the sidebar. I have also posted many Paleo recipes and cookbook reviews on my Book Blog.
Posted by Sue Jackson at 12:05 PM

Did you use liquid stevia or powdered stevia? What brand? Thanks!

I use Truvia brand - it's a powder/granulated, much like sugar. I replace other sugars (like honey or maple syrup) with it, sometimes keeping a bit of the other sweetener (like 2 T of the maple syrup in this recipe) for flavor or consistency. When you sub Truvia for other sweeteners, it is about 6 times sweeter than sugar/honey/etc. So, if I am replacing a 1/4 cup of other sweeteners (as in the cake recipe here), 1/4 cup = 4 Tablespoons = 12 teaspoons. Divide by 6 and that gives you 2 teaspoons of Truvia.