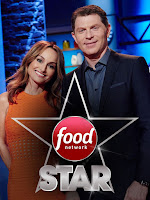 So, you may have noticed that after several years and many dozens of TV Tuesdays, I have not reviewed a single reality show. That's unusual, given how much of what is on TV now is reality TV. There's a simple reason for that: I really don't watch reality TV. I prefer scripted dramas or comedies and watch a very wide range of those, but there are only two reality shows I watch.

One is The Amazing Race, which is still - well, amazing after all these years. We used to watch it with our sons and loved cheering the teams on together, but I'm the only one left in my family who still watches it. The other reality show I watch is Food Network Star - I love to cook, I love to eat good food, and I enjoy this reality show that focuses on improving skills in the kitchen and on camera. The bonus: my son who rarely watches TV will sit and watch it with me if I turn it on during lunch!

The concept of Food Network Star is quite simple (and obvious from the title!) - it is a competition to find a chef who will be given their own show on Food Network. Pretty cool. The really cool part is that not all of the contestants are professional chefs (though many are) - some are caterers or chefs-in-training or even just people who cook for their families. There are usually 12 contestants in all, and each week presents them with different cooking challenges. Sometimes they work in teams and sometimes they are solo. Challenges almost always include some sort of presentation at the end, with the contestants learning how to handle appearing on camera. Usually one person (sometimes two) is eliminated each week, based on the appearance and taste of their food and the quality of their presentation. At the end, three finalists record pilots for their own shows, and one person is chosen as the winner and goes on to have his or her own Food Network show.

I enjoy watching the challenges, the cooking, and the presentations, but it is also fun to watch the relationships that develop over the course of the show. One reason I like this show and not other reality TV is that I really don't enjoy watching people be mean to each other! The contestants here are generally supportive of each other, and the judges - lately, Bobby Flay and Giada De Laurentiis - are also kind and supportive, often giving someone who messes up but seems to have potential another chance.

The show is now in its 13th season (episode 4 just aired). I think this is the 3rd or 4th season I have watched. It's fun to see one of the contestants on Food Network later, or even - occasionally - making it big. I just discovered in researching this post that Guy Fieri - renowned now for Guy's Big Bites and Diners, Drive-Ins, and Dives (one of our faves) - was the winner of season 2!

Season 13 is now available On Demand through cable providers. My own On Demand doesn't list the episodes in order (for some strange reason), so I refer to this episode list to figure out which one comes next - the show really doesn't make sense if you watch it out of order! You can also watch full episodes of the current season for free on the Food Network website. The current season - and most past seasons - are also available on Amazon for $1.99 an episode or a full season starting at $9.99 (some are longer than others) - see links below. And if you are interested in the history of the show and past winners, I found the Food Network Star Wikipedia page very interesting.

Do you watch any reality shows? Have you seen Food Network Star yet?