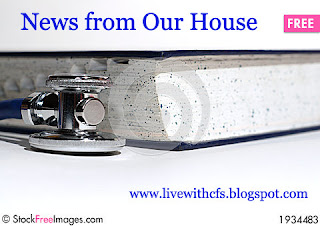 Our son's struggles with ME/CFS (myalgic encephalomyelitis / chronic fatigue syndrome) and tick infections (Lyme disease, bartonella, and babesia) got even more difficult this year, but he is beginning to see some improvements now, thanks to a variety of new treatments.

It's been a long, hot summer here with seemingly never-ending crises in our family, but the biggest one has been the decline of our son's health. When he moved back home in May (he's 25), he was in terrible shape - worse than he's been in years - with a bunch of new symptoms and 40 pounds lighter. We knew he hadn't been doing well lately, but we didn't realize just how bad things had gotten. I took him to an Integrative Health practice that we'd heard good things about from local friends in our support group. The practice includes several different medical professionals, though we have been focused on two of them: a Nurse Practitioner (NP) who specializes in tick-borne infections (but looks at the whole body) and a Functional Medicine Practitioner, also a nurse, who specializes in GI issues and genetics. Both have been helpful so far, and with a bunch of new treatments and changes, our son is slowly improving. We hope to get him back to the point where he can live independently and even support himself; it is a slow journey, but we are seeing progress. Here's a summary of what we have learned and what he is trying, in the hopes that some of this will help others as well.

Brief History and Background
It's always hard to give a "brief" history of our son's illnesses because it is complicated, but here goes. He became ill with ME/CFS in 2004, two years after I did (his younger brother had milder ME/CFS that began at the same time but he is now fully recovered). By spring 2006, he was doing quite well, thanks to treatment for Orthostatic Intolerance and was back to school full-time, back in band, and even playing soccer again.

In April 2007, he had sudden onset of joint pain, plus all of his usual ME/CFS symptoms worsened. He tested positive for Lyme disease (a lucky thing, since the tests only catch about 60% of cases) and was treated for it. The joint pain improved, but he never really got back to that good state he was in the previous year. Over the next three years, his condition gradually worsened. Finally, some strange symptoms - and the help of other parents online - clued us into the culprit, and we took him to an LLMD, a Lyme specialist. He confirmed that our son had two other tick infections, bartonella and babesia, in addition to Lyme. Since the three infections had been present for so many years (and gone mostly untreated), they were dug into his system pretty solidly and were difficult to treat. His immune problems due to ME/CFS made treatment even trickier.

Fast-forward ten years. With treatment for the three tick infections, plus more treatments for ME/CFS, he improved to the point where he was able to start college on time, live on campus, and graduate with an engineering degree. The past ten years had its share of ups and downs, but each time he got worse, we got the bottom of the issues and treated him. This winter, though, he experienced the severe decline that I described. He was living away from home, there was a lot of stress in his personal life, and I had switched him from his usual tick infection treatment protocol (Byron White) to a different one (Zhang), a change I greatly regret now, so his tick infections had gotten worse, with worsening joint pain, fatigue, nausea, and headaches. In addition, he had developed completely new and alarming symptoms, including severe nausea, vomiting, a burning pain in his stomach, and severe anxiety.

The Tests
Our new medical practitioners ordered a slew of tests at his first visit, including:

The Diagnoses
Based on all those tests, we went back for a follow-up visit with both practitioners and learned a lot (some we already knew but much of it was new, recent, and surprising):

Results So Far
So, he is doing better, improving slowly but surely. He is continuing to work on diet and increasing the dose of the new supplements listed above. He has more testing to do (the saliva test and the follow-up GI testing through Ubiome), and follow-up appointments at the end of August. All these new supplements on top of the many pills we already take are a lot to keep track of, but we're helping him to juggle it all.

Now you see why I haven't had as much time for blogging or social media this summer! This crisis was frightening for all of us, and he really hit bottom by May, but we are hopeful that he will continue to improve. His goal is to make use of that engineering degree and get a full-time job so he can support himself.

I recognize that his particular set of problems is both unique and complex, but I thought that elements of what he's been dealing with would be helpful to others. In particular, I highly recommend the GI Effects testing kit from Genova Diagnostics - we learned so much surprising information from that.

Have you dealt with any similar problems? Or found some effective solutions to some of these problems? Please share your experiences in the comments below.
Posted by Sue Jackson at 11:23 AM