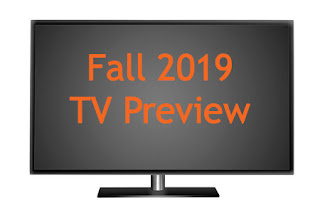 Yay! It's officially fall! That means cooler weather (thank goodness), jeans and sweatshirts, beautiful foliage, and...a new TV season! Even though streaming has made new shows (and old favorites) available all year round now, my husband and I still enjoy a bunch of shows on network TV (watched On Demand, according to our schedule) as well as on streaming. This is the time of year when the networks begin to premier their new shows, being back more seasons of old favorites, and yes, the streaming services do, too.

First, some of our old favorites on network TV that we are looking forward to this fall, in order of release date (my reviews, with trailers, are at the links):

The Resident - We really like the cast of this medical show, though in the first season, it seemed like all of the older doctors were evil...not just bad, but pure evil. They've tamped that down a bit now (only one of the attendings turned out to be truly evil), we enjoyed season 2, and we are looking forward to season 3, starting September 24 (tonight!).

New Amsterdam - Yes, another medical show! Somehow we always get hooked on them. This one just started last year, with Ryan Eggold (an actor we liked on The Blacklist) as Medical Director Dr. Max Goodman, who is battling cancer while trying to fight against the medical bureaucracy and put patients first. The entire cast is great, and it's nice to see the good guys win. It also starts tonight, September 24.

Grey's Anatomy - Why do all the medical shows start the same week?? No idea, but Grey's is, of course, the gold standard in this category. My husband says he is starting to get sick of it, but I'm not! Never. And he's a good enough sport to continue watching it with me. I still love it and look forward to it every week. It's 16th (count 'em!) season kicks also kicks off this week, on its usual night, Thursday, September 26.

The Rookie - This newcomer turned out to be one of our favorite shows last year! Nathan Fillion stars as John Nolan, the oldest rookie cop in LAPD's newest class. As always, he brings his considerable charms to this role, but what we like best is the way this action-packed, suspenseful police show also blends human stories and humor into its mix. Its second season starts next Sunday, September 29, and we will be watching it On Demand Monday!

The Blacklist - We have stuck with this show through six seasons of twists and turns, main characters' deaths, and more. This unique show has an elite FBI black ops group working with renowned (and Most Wanted) criminal Raymond Reddington, played masterfully by James Spader (he's come a long way from the pirate outfit in Fast Times at Ridgemont High). We still enjoy this fast-paced thriller, and its seventh season begins on Friday. October 4.

Madam Secretary - I think this is another one my husband is getting a little bit tired of, but he keeps watching it with me...and I still love it! Tea Leoni is fantastic as Secretary of State Elizabeth McCord, with Tim Daly by her side as her husband, religious expert, and sometime CIA employee. Each episode, Elizabeth solves some unsolvable and complex international problem with wisdom and compassion. Ahhh...if only she and Keifer Sutherland's President Tom Kirkman on Designated Survivor were our leaders in real life! A girl can dream. Its sixth season premiers on Sunday, October 6.

I will also hopefully have the time to watch This Is Us and A Million Little Things on my own...though my TV alone time is severely limited these days.

Bluff City Law - This new legal show on NBC premiered last night on September 23 (my husband is away, so I have to wait!). Jimmy Smits returns to the law (he starred on L.A. Law for 6 years) in this father-daughter legal practice.

All Rise - Another legal show, premiering on the same day. Seriously, what is up with the confluence of medical and legal show premiers?? Anyway, this one looks intriguing, about a newly appointed judge who wants to make a difference. I'm a bit more interested in this one than the previous one, but we'll see. Also started Monday, September 23.

Emergence - Whew. For a while, I didn't see any new sci fi or paranormal thriller on the docket for this season, but this one looks right up our alley! I can already see similarities to The Crossing and Manifest (which returns for a second season this winter). It premiers tonight, September 24.

Stumptown - The new detective show starring Cobie Smulders (of How I Met Your Mother fame) as a P.I. has been described as similar to the classic The Rockford Files. I like the lead actress and loved the trailer - action, suspense, great sense of humor, and an awesome soundtrack! It premiers Wednesday, September 25. Check out this hilarious trailer:

Evil - And one more paranormal entry for this new fall season! A logic-driven clinical psychologist teams up with a representative from the Catholic church to investigate strange cases to determine, among other things, if someone is possessed or a psychopath. Looks intriguing - could be good. It starts Thursday, September 26.

And, finally, we have several of our favorites returning to streaming services later this fall. Yes, I realize this is a LOT of shows - we probably won't dive back into those on streaming until the network shows go on hiatus for the holidays.

Shameless - We don't get Showtime, so we have always watched this hilarious family drama on Netflix, and season 9 just arrived on Netflix - hurray! This is our "watch during lunch on weekends" show, and it never fails to amuse us. Those crazy Gallaghers!

Goliath - OK, so this show starring Billy Bob Thornton as a disgraced, alcoholic lawyer had an excellent first season and a seriously bizarre, warped, graphically violent second season. Thornton is so good, though - as well as the rest of the cast - that we're willing to give it one more try. It returns for its third season on Amazon Prime on October 4.

Tom Clancy's Jack Ryan - This adaptation about the famed character from the Tom Clancy novels stars John Krasinski (Jim on The Office) as a deskbound CIA analyst who gets dragged into field work unwillingly. The first season was excellent and very movie-like (no surprise since there have been countless Jack Ryan movies), and we are very much looking forward to its second season on Amazon Prime, which begins on November 1.

The Man in the High Castle - This alternate history about a world where the Nazis won WWII has been fascinating and twisty, with some sci fi/time travel elements added in. We're looking forward to seeing what happens in season 4, which begins on Amazon Prime on November 15.

The Marvelous Mrs. Maisal - I watched season one of this fabulous show about a wife and mother who wants to be a stand-up comic in the 1950's on my own, but my husband caught up, and we watched season two together. We are both excited for season 3 of this original, color-saturated, funny show, starting on December 6 on Amazon Prime.

(I see my streaming looks biased toward Amazon Prime, but that's just because we've been watching a bunch of Netflix shows all summer, some of which I will be reviewing here in coming weeks).

WHAT FALL SHOWS ARE YOU LOOKING FORWARD TO??