ME/CFS In the News & Advocacy 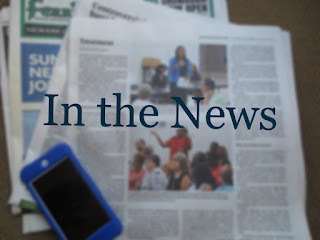 I'm back! Please excuse my absence from the blog (and from much of social media) the past few weeks. I have been furiously working on editing my forthcoming book, Finding a New Normal: Living with Chronic Illness. The last time I wrote a book was more than 20 years ago, so I had forgotten what an arduous job editing is! Besides, I wasn't yet sick back then and it was all done with pen and paper (!), so this was a different experience. It was worth the exhaustion and stress, though, because I turned it back over to my editor yesterday, and the hardest part is finished now. I've got a great editor who is helping to make the book the best it can be. I hope to publish it before the end of the year!

So, for today's post I have a catch up...a bunch of videos about ME/CFS in the news recently and some advocacy efforts. It's exciting to see how much is happening - word is finally starting to get out!

Joe Madison, a "tireless advocate for African-Americans and other minorities" hosts a show in Sirius XM Radio Urban View. Last month, he invited Llewellyn King, creator and host of White House Chronicle and frequent ME/CFS advocate, and Linda Tannenbaum, founder and CEO/President of Open Medicine Foundation, on the show to discuss ME/CFS and its impact on minorities. You can watch the video of the show here:

(the audio-only link is not available right now).

Llewellyn King has been busy lately! On his own show on PBS, White House Chronicle, he hosted Dr. Ron Tompkins of Harvard Medical School in an episode titled "Medicine and Engineering." In this discussion of new frontiers in medical engineering and the need for medical research, Dr. Thompson mentions ME/CFS. You can watch the episode here:

In California, a musical and awareness-building event was held to benefit ME/CFS, featuring singer-songwriter Marian Call. The talented artist is originally from Alaska and has friends and family with ME/CFS. The evening included moving talks by several advocates, including host Emily Taylor, who is Director of Advocacy and Community Relations at Solve ME/CFS Initiative and whose mother has ME/CFS. You can watch the entire show here, enjoy the beautiful music, and listen to the moving words of the speakers:


Wow, so much has been going on in the ME/CFS world lately! We are fortunate to have such tireless advocates helping to spread the word about ME/CFS. I'll try to get to a Research Update next week, as I continue to catch up.
Posted by Sue Jackson at 5:18 PM

Email ThisBlogThis!Share to TwitterShare to FacebookShare to Pinterest
Labels: advocacy, CFIDS in the News, community, Research