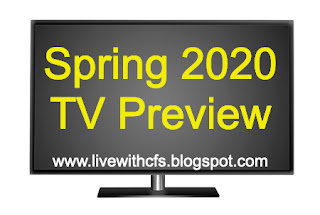 A lot of the shows we watch on cable are wrapping up from their fall/winter seasons in the next few weeks, so I am planning ahead for the spring TV season. I'm not seeing an awful lot that is new (at least on the services we have), but we do have some old favorites (links are to my reviews) coming back and a few new shows to try:

The Rookie (ABC), one of our favorite TV shows, just returned for its second season on February 23, and it is just as good as the first season so far! We love the cast, including Nathan Fillion as LAPD rookie John Nolan, and the perfect mix of action, suspense, drama, and humor.

Good Girls (NBC) is another of our all-time top shows, and it just returned for a third season on February 16. It's got an outstanding cast of kick-ass moms who turn to a life of crime, and this new season is so far just as twisty as the first two, with that perfect blend of suspense, drama and humor.

The Blacklist (NBC) (Huh, it seems I have never reviewed this one!) returns for the second half of its seventh season on March 20 (this Friday). We still enjoy this action-packed thriller starring James Spader as a master criminal working with the FBI.

Killing Eve  (AMC) comes back for season 3 on April 26. This award-winning show is fabulous, starring Sandra Oh as a British agent obsessed with a female serial killer (played by Jodie Comer), who is equally obsessed with her. Chilling, creepy, and compelling.

Ozark (Netflix) returns for its third season. This show, starring Jason Bateman and Laura Linney as parents unwillingly caught up in a life of crime, is SO good!! Great cast, great suspense, and super twisty.