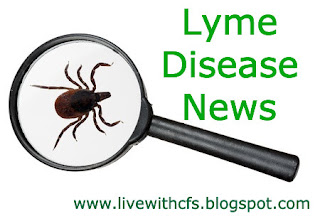 It's been a while since I've written here about Lyme disease and other tick infections, but they are still seriously affecting our lives every day! I wanted to share some interesting information I've learned recently.

First, in case you're not aware, everyone with ME/CFS, fibro, and similar illnesses should rule out tick infections, as they are very common and share many symptoms with our illnesses. Many of us, including my son and I, have both ME/CFS and tick infections. The urgency is that these infections can cause permanent neurological damage when left untreated, so you want to find out immediately if there are any tick infections behind the scenes. More information on why and how here.

Also, there are no reliable blood tests for Lyme, due to the nature of the Lyme bacteria (it doesn’t stay in the bloodstream) & the fact that many people--especially those with immune disorders like ME/CFS--don’t make the antibodies. Plus, current tests only look for 1 strain of the Lyme bacteria, when hundreds of different ones exist! The one they look for is an East Coast strain, since Lyme was discovered there, though there are many strains, and doesn't include any of the strains common to the West Coast or Europe or anywhere else. The best blood tests (like from Igenex) only catch about 65% of cases. So, if you get a positive blood test result, you definitely have Lyme, but a negative blood test result doesn’t tell you anything. In addition, Lyme is only one of a dozen common tick infections, and most doctors only test for Lyme. The only way to know for sure if you have tick infections (including Lyme) is to see a Lyme specialist or LLMD (Lyme Literate MD) who will run the best tests available but will also look at symptoms, history, and physical exam to determine if tick infections are present and which ones. Any single positive test result for ANY of the tick infections means you were definitely bit by an infected tick, then the doctor can figure out which ones based on his or her experience (that’s why you need to see an LLMD). This link includes information and resources for finding an LLMD near you (they are all over the world).

OK, so onto the News!

As I explained above, the best existing tests only catch about 65% (at best) of Lyme disease cases. This has long been a problem, as too many doctors think that a negative test rules out Lyme entirely. Existing blood tests either look for antibodies (like the Western Blot or ELISA test) or look for the DNA of the Lyme bacteria itself (PCR testing). As explained above, there are problems with both approaches.

Now, there is a wholly new testing method developed by Phelix Labs in France that looks for bacteriophages, tiny organisms that live off the Lyme bacteria. There are tens to hundreds times more of these "phages" than of the bacteria itself, and they stay in the bloodstream, unlike the spiral-shaped Lyme spirochete bacteria that burrow into tissues and joints, "hiding." The phages are specific to the type of bacteria and they only hang around for as long as there is an active infection. These are all advantages over existing technologies for either antibody or PCR testing. This excellent article from Health Rising explains more about the new testing method, using the example of a severely ill woman diagnosed with ME/CFS who finally discovered she had Lyme, thanks to this new test (after many negative tests of the older types).

For more information or to order the test, you can contact Phelix Labs in Europe or here in the U.S., R.E.D. Laboratories in Nevada is offering the test. All of the information, forms, ordering instructions, etc. are at that link.

There is news on the Lyme treatment side of things, as well! For years, the choices have been traditional antibiotic methods (plus other prescriptions, depending on which other tick infections are present) or herbal protocols from a small group of experts (Cowdon, Byron White, and Buhner).

Now, in what Lyme experts are calling a game-changer, an old medication is being used in a new way to effectively treat Lyme disease in many people for whom traditional treatments have not worked. Disulfiram is a prescription medication historically used to treat alcoholism. Research from Stanford University in 2016 showed that disulfiram can be effective in treating "persister" forms of Lyme disease--those that are resistant to traditional treatments, especially in cases of older infections that went undiagnosed for a long time. This excellent article and 12-minute video from Dr. Marty Ross (a well-known expert in Lyme) explains exactly how disulfiram works, who is the best candidate for it, and what the side effects and risks are. He also explains who is a good candidate for the treatment. The article includes data from Dr. Ken Liegner in treating 70 patients with disulfiram, showing that 92.5% improved! That's a stunning statistic for a very hard-to-treat infection. Here is a link to one of the early published scientific studies on disulfiram.

Confirmation of the Effectiveness of Certain Herbs in Treating Lyme Disease

This next bit of "news" isn't all that new for some people, but the study is recent, and I have started this protocol myself. I'm already seeing great results and improvements!

A study from Johns Hopkins compared a bunch of different Lyme treatments, both prescription and herbal, and found that 7 herbs had greater effectiveness at killing off Lyme bacteria than the classic antibiotic treatment most often used, doxycycline. These include:

This article provides an easy-to-understand summary of the study, in layman's language, and here is a link to the actual study paper, published in Frontiers of Medicine.

Although some LLMDs have been using some of these herbs for years, getting this clear evidence of effectiveness in a published study is still news because they were proven more effective than the antibiotics usually prescribed, and a published study can be shared with any doctor. Although I was already taking samento, and my herbal combo product (Byron White's A-L Complex) contains black walnut, the rest of these were new to me. I shared it with my LLNP (Lyme literate nurse practitioner), who knew about these. I immediately increased my dose of samento and began taking Japanese knotweed, and I am already greatly improved! As I get used to these and bring the doses up (I have to go up gradually to manage the Herx reaction or temporary worsening), I will add some of the others. I didn't realize that my Lyme wasn't well-controlled until I worsened considerably the past year, and now I have some new tools to hopefully better control it ... and maybe even finally get rid of it? This is the best I have felt in the past year!

So, for anyone struggling to diagnose or treat Lyme disease, these are some new options to consider. And if you have ME/CFS or fibromyalgia and have not considered tick infections yet, you should get evaluated by an LLMD to rule out tick infections. We learned the hard way with our son that the longer they go undiagnosed and untreated, the harder they are to get rid of (we knew he had Lyme but it was 3 1/2 years more before we found out he also had two other tick infections and by then he was very ill). So, find an LLMD, share this new information, and start on the road to improvement!