I was very badly crashed this weekend - one of those lost weekends when I was totally useless and trapped on the couch.  So, the only thing I was able to do was read and watch movies.  Coincidentally, Ken and I were on our own both Friday and Saturday night, as Craig spent the entire weekend at his friend's house (they felt bad because their son was stuck at our house through the whole hurricane!) 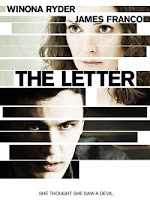 So, Ken and I watched 2 movies this weekend - one horrifyingly bad and one surprisingly good:

Since Ken had been so kind to me all week, taking care of me and running errands while I was crashed, I chose the Action section at Redbox Friday night (while he was getting Thai food for dinner) and chose The Letter, described as a psychological thriller.  It was definitely psychological but contained no action or suspense.  This reviewer at IMDB so perfectly captured its awfulness that I thought I would just quote from it:


"“The Letter” is not a thriller. It is barely a film. It’s a boring, self-important, disjointed and pointless pile of tripe masquerading as a movie.

The story, what little there is, follows Martine Jamison (Winona Ryder), who is starting rehearsals on her new play in New York. A new actor named Tyrone (Franco) causes problems on the set and develops a fascination with her. Over the next weeks, Martine becomes paranoid that someone is trying to poison her, and she begins to rewrite her play.

Honestly, that one-paragraph blurb makes more sense and is better constructed than the entirety of this film."

Well, that pretty much sums it up.   This movie was just really bad, and not even funny bad.  It made no sense at all, even when the "big secret" was sort of revealed at the end (I think).  Ryder was good, as she always is, but everything else was awful.  In fact, as I sat down to write this review, I asked Ken, "Hey, do you have any idea why it was called The Letter?  Was there a letter even in the movie?"  Nope.  No idea why it even had that title.  Total drivel.

We had better luck on Saturday when we watched a DVD I had gotten from the library last week for my Mom and I to watch together.  Yup, we both agreed a chick flick was far better than The Letter!  We watched The Vow, starring Rachel McAdams (as Paige) and Channing Tatum (as Leo), and it was a surprisingly touching and unique story, based on real-life events.  Paige and Leo meet and fall in love and get married.  Four years after they met, they are in a car accident, and Paige loses her memory of the past five years.  As far as she knows, she is still in law school and still engaged to her old fiance, Jeremy.  She has no memory of Leo at all; when she wakes from her coma, she thinks he is the doctor.  They story continues as Leo tries to woo her a second time, but Paige is emotionally scarred and wants to be around what is familiar to her.  It was warm and more complex than I expected, with some humor and drama - all in all, a wonderful love story, made even better by the fact that it is true.

Have you seen any good movies this week?
Posted by Sue Jackson at 9:40 PM