I thought we'd spend our time inside during Hurricane Sandy, watching movies with the kids and reading aloud once the power went out.  Ha!  We never lost power - which was very fortunate, of course - but it meant that our two sons and their friend (who was stuck with us for the duration of the storm) played video games nonstop (with a few board games thrown in for good measure)!  So, Ken and I read a lot, and we did finally watch some movies together after the storm had passed:

Tuesday night, before our oldest son returned to college, we all watched Thor.  I've said here several times that I've had my fill of superhero movies the past few years, but my husband and kids love them, and I'd heard Thor was good.  And it was good...but it was another superhero movie!  It is, of course, the story of Thor, the Norwegian mythological figure who wields a hammer.  In the movie, Thor and his compatriots are actually real but have remained on their own planet for the past however many centuries.  Thor is all set to ascend to the throne, but he does something rash and dangerous and is instead exiled to earth. Personally, I liked the parts that took place on earth the best.  The movie has an amazing cast, and I loved the humor integrated into the story throughout (plus actor Chris Hemsworth who plays Thor looks amazing wearing a t-shirt....or not!).  My kids would probably disagree and say they liked the off-earth, fantasy parts of the movie best. 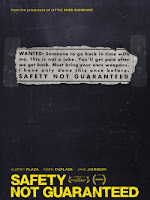 Friday night, despite the very short school/work week, I was beat.  So, when my son pleaded with me to put the pork chops back in the fridge and order Chinese take-out, it didn't take much convincing!  On the way to pick up the take-out, I stopped by Redbox and grabbed a couple of movies - yes, a perfect evening!  So, with our son, we watched Safety Not Guaranteed, an Indie flick that made my husband say, "Oh, no, not another quirky movie!"  And, yes, it was definitely quirky but also very warm, funny, and likeable.  A writer for a small Seattle magazine (played by Jake Johnson who plays Nick on New Girl) decides to follow up on an odd personal ad looking for a partner for time travel.  He takes two interns with him to investigate.  One of the interns, played by the adorable Aubrey Plaza (who I just read is from our town, Wilmington, DE!), pretends to answer the ad but gradually comes to like the odd guy who placed it, as he trains her for their "mission."  It was funny and tender, and all three of us enjoyed it very much.  I've included a clip below, in case you are interested. 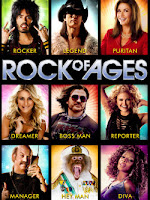 Double-Feature!  After Craig went to bed, Ken and I watched Rock of Ages, the 80's rock tribute starring Tom Cruise.  It was OK, but we didn't love it.  It turned out to be a musical, based on an actual stage musical, and we guessed it probably worked better live.  Despite the impression given by the ads and previews, Tom Cruise's character, Stacee Jaxx, a big rock star, is not actually the main character.  It's really a rather trite story about Sherry, a girl who takes the bus from Oklahoma to LA, hoping to have a singing career, and Drew, the young bartender hoping to make it big with his rock band whom she meets when she arrives.  We decided the best way to describe the movie was uneven.  By the end, we realized it was all meant to be tongue-in-cheek, something of a parody of rock musicals (at least we think it was...).  And there are some funny moments, but in some scenes, especially those with Sherry and Drew, it seems to be taking itself seriously.  So, overall, it wasn't all that funny and it wasn't all that warm-hearted.  Yes, the music is great, especially if you came of age in the late 70's and early 80's, but the songs are all sung by the actors, not by the original artists (again, something that might have worked better live).

(If you are interested in what we read this week, check out the Monday post on my book blog.)