Sorry for not posting in a while.  Hurricane Sandy kept us busy for a few days, then Halloween, and life is just now returning to normal.

We were very lucky with the storm.  Its center came right through our area in northern Delaware, pretty much a direct hit, but we never lost power and there was no flooding or major damage anywhere in our neighborhood.  We are fortunate to be inland a bit; the coastal towns of NJ and DE really got hit hard, as you've probably seen on the news, and will be digging out for some time.

So, for us, the storm was actually nothing more than a break from our usual routines, a mini vacation of sorts.  Schools - and even college - were closed from Monday through Wednesday, so our college-aged son was home for an extended visit.  Our younger son had a friend sleep over on Sunday night...which turned into a 3-day visit since the governor closed the roads!  Fortunately, he's a great kid, and we didn't mind having an extra boy here.

We spent much of the week just relaxing which was just what we needed.  We played games, watched a little TV, read, ate well, and carved our jack-o-lanterns (mine's the little one)! 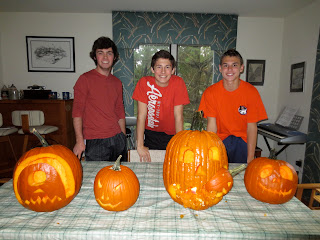 Both Jamie and I finally seem to be over the colds that have plagued us for weeks, except for a tiny bit of a lingering cough in both of us.  To be honest, I was really starting to worry about myself because I felt pretty awful for almost a month and couldn't figure out why.  I think now that it was just this nagging cold virus that triggered an extended crash, as they often do.  Fortunately, this one only lasted 1 month instead of 9 months like a few winters ago.  I did end up taking Zithromax for 5 days.  I went to see the doctor on Friday, before the weekend and the storm.  She said she saw signs of the beginning of a sinus infection; my lungs were still clear at that point, but I was worried about developing bronchitis since. like all of us, I am so prone to secondary bacterial infections, due to CFS's immune dysfunction.  I did go ahead and start the antibiotics the next day, and I think that is what finally helped me to kick this. 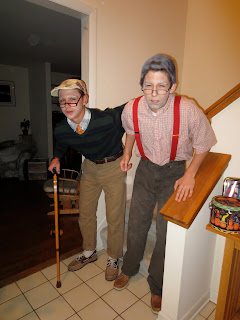 So, I am finally feeling pretty good again - back to my own normal.  I have even taken 2 walks this week since the storm passed!  Jamie went back to college on Wednesday, and the rest of us enjoyed a fun Halloween night.  We usually dress up together, in some sort of theme, for trick-or-treating.  Craig and his friend were dressed as old men, so Ken and I decided to go as babies/toddlers!  We only went to a few houses with the boys and their friends before they ran off on their own - very different from the old days when Ken had to go to every house with them!  We had fun, and now we have a big cauldron of candy that is mostly off-limits to me (thank goodness) because of my dairy intolerance...though I did go a little crazy last night with the mini Heath bars - they're just so good!!

So, I hope all of you out there in the storm's path are in as good a shape as we are and didn't suffer too much in the storm.  I know many people in NJ, NY, and eastern PA are still without power - if you are one of those, I hope you were able to find warm shelter with friends or family.

And I hope you had a Happy Halloween! 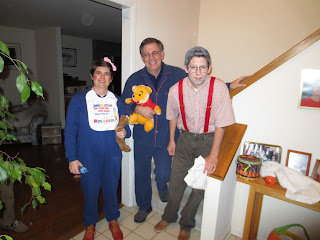 Glad to hear all is well in your world!

I'm so glad that all of you are okay! I was thinking about you last night!

It looks like all of you had a lot of fun with your costumes.

And, I'm glad you're feeling back to your own normal! That is a good way to put it.

I'm so glad you did suffer terrible effects from Sandy. Great news. Also good to hear you are on the mend from the cold. I'm the same with a virus, if I don't "catch" it my M.E. still gets worse, and if I do catch it, it often takes a few weeks to recover. Oh the joys! Nice pumpkins!

Glad you weathered the storm well....I have been out of the loop blog wise....trying to get back into it.... take care and God Bless

Glad you all were safe from Sandy, and that you're feeling some better.