Surprise, surprise...I am starting the week behind again.  Monday morning, I heard Jamie and Ken leave the house on time, heard Craig get in the shower at 7 am, so I thought, "Great!  Back to normal today - everyone at school and work, and I can finally get some work done!"  Then I got dressed and came downstairs to find Craig wrapped in a quilt on the recliner, shivering with fever, coughing, and telling me his chest hurt.  We spent hours yesterday at the pediatrician's office (a 2 hour wait!), getting a chest x-ray, and going to the drugstore.  We finally got back home at 3 pm - waaay past my nap time!  Turns out he has a sinus infection and bronchitis...but no pneumonia, thank goodness.  I was useless the rest of the night.  Craig was in terrible shape today but is starting to perk up a tiny bit, thanks to strong antibiotics. 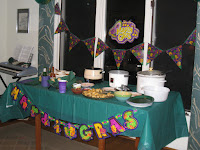 But today is Mardi Gras Day!  We had a very nice party Saturday night - about 18 adults and 6 kids.  Good food, good conversation, and great company.  Before CFS, our Mardi Gras parties were huge affairs, with 50-60 people!  Ken and I agree it's actually more fun this way, with just some close friends (who all help).  Instead of drinking until 2 am, everyone was gone by 10:30 pm!  If you want to see what a real Mardi Gras parade is, you can check out this live webcam (though I think by this time of day, the major parades might be finished already - there were still some truck parades going by last time I checked!)

And, finally, though it's Tuesday already, here's a quick recap of the movies we saw last week:
Have you seen any good movies this week?  Hope you have a good Mardi Gras Day!

P.S. If you're interested in what we're reading this week, check out my Monday post on my book blog.)
Posted by Sue Jackson at 4:12 PM