It's been a while since I wrote a Movie Monday post because I can't get my family to watch any movies with me! They have all been into various TV shows On Demand, on Amazon Prime, on DVD, and on Hulu. Let's see, we've been watching Arrow, Firefly, Dexter, Bones, Elementary, Sherlock, and The Following.

But this weekend, we took the kids and two friends up to my mom's house in the Poconos for snowboarding to celebrate our son's 15th birthday. While the kids were out snowboarding in the evening, Ken and I finally had a chance to watch a movie: 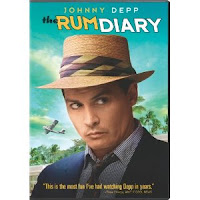 We watched The Rum Diary, starring Johnny Depp.  It was good but a bit strange. We didn't completely understand what it was about until the closing credits!  It turns out it is based on a true story of a New York reporter (Hunter S. Thimpson) who heads to Puerto Rico in 1960 and takes a job with a small newspaper there. As the title suggests, he likes to drink...a lot! So, the movie follows his drunken escapades around the island with fellow reporter Sala, but there is a lot more to the story under that veneer. He meets a wealthy American named Sanderson who is involved with all kinds of illegal activities. He gets pulled into it all for a while, until his reporter instincts kick in and he finally finds a way out.  It was more somber than we both expected, though it has a few funny moments. We both enjoyed it. Depp does drunk and disorderly so very well!

Have you seen any good movies lately?
Posted by Sue Jackson at 3:46 PM

hi sue...this is not a comment, sorry a question...what do you think of ampligen? http://ampligen-treatment.blogspot.mx - thoughts? thanks HD - glad your boys got out in the snow:)

I have never tried Ampligen, so I can't really comment on it.

I do know people who have benefitted greatly from it, but I have also heard (second-hand) of people who reacted badly. My understanding is that it only works for a specific sub-group of CFS patients - those with the R-nase-L defect (an immune system defect) - testing can tell if you are one of the ones who will respond well or not.

It just got rejected from the FDA (for now), so it is still VERY expensive - available only through studies or at a very high cost.

That's about all I know!

I can recommend both low-dose naltrexone and Imunovir - both target immune system dysfunction, and both have helped my son and I.

thanks sue...a friend of mine posted on FB a petition for it to get approved for an acquaintance hat had "cancer" and no other cures..she doesn't have cancer she has ME...and i was just curious of your thoughts on the FDA approval...after reading more about it myself. i read the same info - greatly helps a few...severely hurts also... I don't know if she has the R=nase-L defect...