We had a busy week last week, but the good news is that everyone is doing pretty well health-wise! My time has still been filled with medical related to-dos, but I do hope to find time to write here this week and bring you up to date on our crazy dietary adventures and other topics.

Meanwhile, it is Movie Monday! 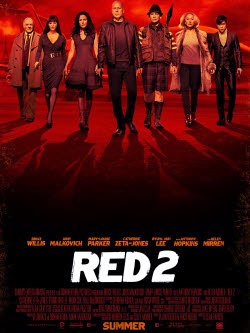 We only had time for one movie this week. On Friday, after a long week, we rented Red 2 with our 16-year old son. He'd already seen this one with his friends at the theater, but he's been wanting to share it with us for a long time. He is a huge fan of the original movie, Red, and we enjoyed it, too. If you missed that one, it was a gem - an action movie with a great sense of humor and an all-star cast, about a group of retired government assassins whom are targeted by the CIA because they know too much. Red 2 is the sequel, with a few of the original cast members (John Malkovich, Bruce Willis, and Helen Mirrin) who are once again pulled out of retirement...this time to both save themselves and the world. It was good but not as good as the original. There is still plenty of action - LOTS of shooting and fighting - and a sense of humor, but it just wasn't quite as entertaining as the first one. We enjoyed it - it was good for a bit of fun Friday night fluff - it just wasn't excellent. Best for action buffs or fans of its all-star cast (this one also included Catherine Zeta Jones, Mary-Louise Parker, and Anthony Hopkins, who, as always, plays insane perfectly).

Have you seen any good movies lately?
Posted by Sue Jackson at 4:06 PM