Our college son who'd been home sick for the past two months moved back to his apartment last week! Woohoo!! Besides being thrilled for him, my husband and I were also glad to be able to catch up on our favorite TV shows that our son doesn't watch. So, we spent our evenings last week catching up on Madam Secretary, Grey's Anatomy, The Blacklist, Sleepy Hollow, Resurrection, The Good Wife, and The Americans (yes, we have too many shows going at once but they are all so good!).

Friday night, we watched a movie...that was neither a thriller nor an action flick! Wow. 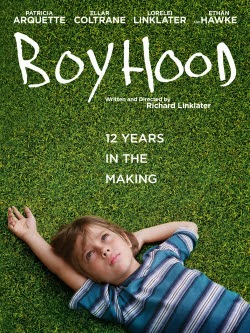 We finally had a chance to see Boyhood, which won Best Pictures awards in both the Golden Globes and the Oscars. You may have heard about this ground-breaking movie last year that was filmed over the course of twelve years to capture - in real time - the childhood of one boy, played by Ellar Coltrane. In the movie, he plays Mason, who is six years old when the film opens and eighteen when it ends. It is a unique and effective approach that makes the characters in the movie feel very real. Even though his parents are played by Ethan Hawke and Patricia Arquette, two famous actors, we still fell completely under the movie's spell, as if we were watching a documentary instead of a work of fiction. Mason lives with his sister and his mother. His dad was absent for much of the kids' early lives but moves to Texas to be closer to them at the start of the film. Throughout the twelve years of the movie, their mom remarries twice, the family moves a couple of times, and Mason goes through the typical joys and pains of childhood and adolescence, as well as some more serious struggles with his family. This movie is so completely engrossing and compelling that by the end, we felt like we knew this family in real life. And the next morning, we both said that the movie popped up in our thoughts and dreams all night long! It's really a stunning achievement and a must-see, but be warned - it is a very long movie (almost 3 hours), so start early.

Have you seen any good movies lately?
Posted by Sue Jackson at 6:47 PM

I saw this movie nominated from an Oscar. Thanks for the review, we'll have to check it out! Thanks for sharing with Small Victories Sunday Linkup and hope you join us again this weekend! Pinning to our linkup board.