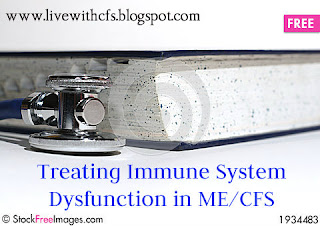 This is my third Throwback Thursday post where I pull together some of my older blog posts on a single topic related to ME/CFS and its treatment - the first was on Physical Therapy for ME/CFS and the second on Orthostatic Intolerance (OI), a condition that is an integral part of ME/CFS. Both posts have had a lot of visitors and discussion, so I am glad that some of these older blog posts are getting some attention and helping a whole new community of people!

Today, I slept poorly (unusual for me) and woke with a sore throat, flu-like aches, and feeling awful. All of these are signs that my dysfunctional immune system has been sent into overdrive. It can happen from overexertion, though treating OI mostly eliminated that. This time of year, these kind of immune symptoms are usually due to being exposed to some sort of virus or other infection - there are many of them going around!

So, I thought I'd devote today's Throwback Thursday post to the Immune Dysfunction in ME/CFS - what it is, how it affects us, and how to treat it and try to normalize the immune system, including what to do when you crash due to exposure to an infection, what we like to call a virally-triggered crash.

Immune Dysfunction in ME/CFS
Immune dysfunction is at the heart of ME/CFS. Based on decades of research, it is most likely the "engine" that keeps our illness going - an immune system that isn't working properly and doesn't recover normally after the initial triggering event (often some sort of triggering infection but sometimes extreme stress like an accident or other trauma). This blog post explains all about the typical Immune System Abnormalities in ME/CFS and how they affect us and our symptoms. It's critical to understand that in ME/CFS, the immune system is not entirely activated or entirely deficient - which is why typical treatments for autoimmune disease or immune deficiencies don't work for us - our immune systems are partly over-active and partly under-active. I've tried to explain this in simple terms because it is essential to understand the basics of how our immune systems are dysfunctional in order to try to improve or normalize them.

Treating Immune System Dysfunction in ME/CFS
Through the years, with the help of some wonderful doctors and my own research, we have tried several different approaches to treating immune system dysfunction - all have been successful and have helped to improve our overall condition and well-being. Each of those small improvements when put together adds up to significant improvement in our ability to function, be more active, and has improved our quality of life.

The first thing we tried for the immune system was low-dose naltrexone (LDN), which is a tiny dose of a medication that has been around for decades and is normally used in larger doses. LDN has been proven to work effectively against dozens of different kinds of immune disorders (no studies on ME/CFS yet, of course!) and is also helpful for ME/CFS patients. I felt better the very first day I took it. That blog post includes details on what it is, how it works, dosing recommendations (less is more), and our experiences. It is not expensive, but you do need a prescription for it.

One of our most successful immune system treatments has been inosine, sold as a supplement in the U.S. or under the brand name Imunovir as a prescription in Europe and Canada. This blog post explains all about inosine/Imunovir, our experiences with it, and the complicated dosing schedule that is necessary to keep it effective. For us, it has done a lot to normalize our immune systems and significantly reduce these virally-triggered crashes we used to succumb to most of the fall and winter. It's also something that is cheap and doesn't require a prescription, so it is in reach for just about all patients - just be sure to read that post carefully about how to use it and the dosing.

Our most recent immune system treatment has also been another very effective one: glutathione injections. It has been well-documented in many research studies that people with ME/CFS have low glutathione levels (a compound in the body vital to energy production and detox) and our bodies don't make more efficiently. Any kind of glutathione supplementation will help to improve ME/CFS, but we have found injections to provide the most significant improvement. Before starting them, my son and I both got bacterial bronchitis about 3-5 times a year (why is explained in my post on immune dysfunction), and each time it would knock us out for weeks or months. I have done my injections twice-weekly as indicated and haven't had bronchitis since I started them - over a year now! My son has not been as diligent about the injections and continues to get bronchitis (he's seen the light now and is trying to remember them each week!). That glutathione blog post includes information on both supplements and injections to boost glutathione.

Treating Underlying Infections
Another common outcome of our immune dysfunction is Yeast Overgrowth. This is both due to the specific type of immune dysfunction common in ME/CFS and the fact that many of us need frequent antibiotics (due to recurrent bacterial infections). Yeast overgrowth is often a silent and stealthy factor in our illness - many people (myself included) don't realize it is an issue until they start to treat it and see how much better they feel. Keeping yeast overgrowth under control (that blog post lists many different approaches) helps my son and I both to feel less fatigued, less achy, and have significantly improved mental clarity (i.e. less brain fog).

Two very important aspects of immune dysfunction in ME/CFS are that old viral infections can become reactivated, and we are especially prone to bacterial infections. So, one of the treatment approaches that often yields the most dramatic improvements is to treat underlying infections. For many with ME/CFS, that means reactivated viruses that remain dormant in healthy people - things like Epstein-Barr virus that causes mono or another herpes-family virus called HHV-6 or various types of enteroviruses (that cause stomach symptoms in healthy people but can linger and remain activated in ME/CFS). This is a treatment pathway that often requires going to see one of the few ME/CFS experts, but is well worth the trouble because it can lead to significant improvement and sometimes even recovery. This blog post summarizes my own improvement after taking antivirals (in combination with LDN) - my virus levels were fairly low (but positive) so my gains were correspondingly small-ish but still important, most critically, an increase in activity level and in mental clarity.

The other kind of infections that ME/CFS patients should look for and treat are the various types of tick infections (Lyme disease is one of those). Even the CDC has now acknowledged these are far more widespread than previously thought (their early numbers were off by a factor of 10 and their revised numbers are probably still too low, due to difficulties in diagnosing), and countries and U.S. states that previously proclaimed they had no Lyme disease are now scrambling to address the "new" epidemic. Our immune dysfunction puts us at even greater risk than everyone else. Blood tests are not very helpful in diagnosing Lyme and other tick infections - the very best tests for Lyme only detect it about 60% of the time and doctors rarely test for any other tick infections. So, if you have had a negative test for Lyme before, that tells you nothing, since it is so prone to false negatives (you can believe a positive result). We learned all of this the hard way. Our son got sicker and sicker over the course of 3+ years while we chalked it up to "just" ME/CFS. We finally took him to a Lyme specialist (the only way to find out for sure) and found that he had 3 different tick infections! With treatment, he has gone from mostly bedridden to attending college, working part-time, and living on his own. So, this blog post explains all the details of Why Everyone with ME/CFS or FM Should Be Evaluated for Tick Infections and how to go about that.

Last but not least, the position I find myself in today, a common one in fall and winter for those with ME/CFS: a sudden crash for no apparent reason. That often means we have been exposed to a virus or other infection that has caused our immune systems to go even crazier than usual, causing increased symptoms. This blog post explains how we prevent and treat virally-triggered crashes.

I think that covers my most important blog posts on the immune system. Since immune dysfunction is at the heart of ME/CFS, treating immune dysfunction (and the underlying infections that result) can often result in the most dramatic and significant improvements. That's been the case for my son and I. We used to spend most of the fall and winter crashed on the couch, and now we are mostly functional, except for a mild, occasional crash (like today, which should only last a day or two from recent experience).

Have you tried any of these immune system treatments?
What have your experiences been?
One that I haven't tried yet is IVIG, so please leave a comment below if you have tried that. I'm curious to hear from those who have used it.
Posted by Sue Jackson at 4:47 PM