Weekly Inspiration: You're Right Where You Need To Be 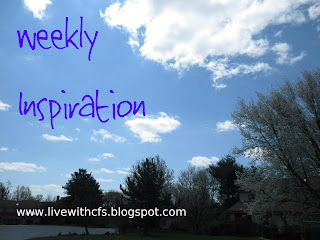 This week's inspiration comes from a wonderful memoir I read in November, Seven: In the Lane of Hope by Michael Marini. Michael happens to be a friend of mine, but I would have enjoyed his

memoir even if I didn't know him - it's a warm, funny, and inspiring story about growing up in a family of 13, and his dad's recovery after a medical problem that almost killed him. You can read my full review of the memoir on my book blog at the link above.

Michael has a great sense of humor that comes out in his book, and there are plenty of laughs in a busy family with 11 kids. But the memoir is also about his dad's recovery, after doctors told the family he was dying. His dad sounds like an amazing character; he has all kinds of sayings that he frequently repeats. He had been a runner and later, a running coach, and each of the kids was on the track and/or cross-country teams in school, so many of his inspiring sayings have their roots in running, but when he was incapacitated and later, recovering, he found that they applied equally well. While reading the memoir, I also found that his sayings often applied to my life with chronic illness.

One of my favorites:

"You're right where you need to be."


He used to say this to encourage his kids while running a race, but later, he reassured himself with this line while in the hospital and recovering. I read this book during my 3-month long crash this fall, when I was feeling horribly discouraged and stuck on the couch. Reading this simple line helped me to relax and recognize that everything else could wait and my "job" right now was to rest and take care of myself. I repeated that line to myself frequently this fall.

Michael also included some great passages about happiness and contentment in the memoir. This one was on a plaque in his mom's kitchen that he'd seen hundreds of times but really struck him one day:

"Allow life's beauty to envelop you. Hold no guilt or worry about what should have been or what might be."


It's again about accepting where you are right now, living in the present, and letting go of past regrets and future concerns. Good advice for us all.

Another thing his dad said, in reference to his time in the hospital:

"Sometimes, it's really hard to slow down and appreciate what you got - even if that's exactly what you need."


This also hit home for me while I was spending my fall on the couch resting. I realized my mind was still in "must be productive and get things done" mode, while I needed quiet recovery time and to live in the present.

Another thing his dad said:

"Live for today, dream for tomorrow, and learn from yesterday."


That seems like excellent advice, whether you are living with chronic illness or not!

Have you read any books lately that inspired you? I'd love to hear about them in the comments below.

You can purchase Seven: In the Lane of Hope on Amazon.