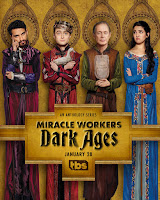 In need of some good belly laughs and all-around silliness? Who isn't right now! We are finding that Miracle Workers: Dark Ages is the perfect answer when we need a lift, with an all-star cast and a sense of humor that reminds us of Monty Python or Norsemen. First, a quick explanation (it's a bit confusing and I had to look this part up!). The first season of Miracle Workers was an entirely different premise; the one we are watching, Dark Ages, is season 2. Apparently, the overall show is based on the writings of humorist Simon Rich. Season 1, just titled Miracle Workers, was based on his novel, What in God's Name, and is about two low-level angels that must save Earth by helping two humans fall in love. Season 2, Dark Ages, is an entirely different story, with the same cast playing different roles, based on Rich's short story, Revolution, and set in Medieval times.

In season 2, Daniel Radcliffe (of Harry Potter fame) hilariously plays Prince Chauncley, the very clueless son of a cruel king in a small town in the Middle Ages. Karan Soni plays Lord Vexler, the king's top advisor. Out in the village, the focus is on the Shitshoveler family (you see, people are named after their occupation). Steve Buscemi plays Edward, the head of the Shitshoveler family, and the town's ...you guessed it ... shit shoveler. His younger son, Mikey, is played by Jon Bass, and his daughter, Alexandra, is played by Geraldine Viswanathan. The first episode opens on graduation day, when Al and her friends are talking about what they will do next. Al is super smart and one of the few townspeople who knows how to read, but she must follow in her father's footsteps and learn the shit shoveler trade. Her best friend, Maggie (played by Lolly Adefope), joins the local convent, but the two young women remain close and often end their days up on a roof overlooking the town and drinking mead. Prince Chauncley is pretty much a screw-up because he's never had to do anything for himself, but he has eyes for Al and wants to be a better person to impress her. That's the basic set-up, but of course, each episode presents a new problem and digs deeper into the characters.

It's impossible to describe the humor of this show--you just have to watch the first episode to see for yourself! If you are a fan of Monty Python and the Holy Grail, you'll love this show. The approach of the show is also very similar to Norsemen, a Viking comedy. Both shows are set long ago but include hilarious references to modern times planted here and there, ready to surprise a laugh out of you (to see what I mean, check out the trailer below; the last scene in it features Chauncley setting out on a road trip). Each episode is just 30 minutes long, so it is perfect when you need a short escape from the sobering news ... or for binging, if you prefer! The cast is amazing; all of them are perfect in their roles, acting straight while making you laugh. The show also has plenty of heart. Radcliffe as Chauncley has this adorably vacant stare, as he fumbles through his life, trying to attract Al's attention. Viswanathan is smart and clever, and Buscemi as her father plays the straight man hilariously. Are you getting the idea? This show will make you laugh!

Miracle Workers: Dark Ages just wrapped up season 2 on TBS, so all of the episodes are available On Demand or at TBS's website (as are season 1 episodes). We are up to episode 6 of 10 in season 2 (and still need to watch season 1). I believe it is also available on Hulu.