Another week gone by!  Last week was a rough one for us, as you well know if you read this blog regularly.  I was crashed, and Jamie, my 16-year old son, was also crashed badly most of the week.  He went back to school on Friday for a partial day and was able to enjoy some of the weekend, but he was back on the couch today.  I think it is, at least in part, a herx reaction to his latest bartonella treatment.  That's good news, but it doesn't make it any easier to get through. 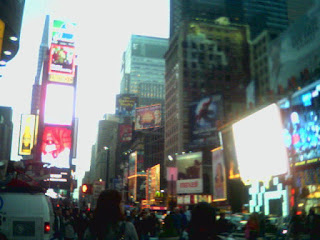 We did enjoy the weekend, though.  My mom and her husband came to visit.  On Sunday, all the guys went to Baltimore for the Ravens-Bills game, while my mom and I took the train to NYC to see a Broadway show.  We also enjoyed a wonderful meal in a Spanish tapas restaurant.  It was a great day, and I handled it remarkably well, thanks to a long nap curled up across two seats on the train (sometimes it's good to be so short!).  It was a gorgeous day in New York.  Here's a photo I took in Times Square (sorry it's not very sharp - my camera phone is first-generation - it has an antenna that pulls out!)

So, with all those sick days last week, Jamie and I watched a lot of movies.  I showed him a bunch of old favorite comedies to cheer him up:
Have you seen any good movies lately?
Posted by Sue Jackson at 4:55 PM

Hope everyone is well this week.