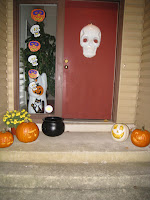 Happy Halloween (a day late!).  We had a very busy weekend filled with all our favorite Halloween traditions.  It was especially nice to spend some time together as a family, after all of Ken's recent traveling and the boys getting older and leading such busy lives.

We went to a local farm (well, it's not actually a real farm anymore, just a store, but it's a tradition...).  We ate tons of hot, homemade donuts and fresh cider, picked out our pumpkins, and Ken guessed their weights.  If you guess within a quarter pound, you get your pumpkin free.  Ken's really good at it, and he missed one this year by only 0.04 pound. 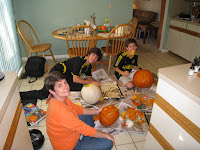 We spent Sunday carving jack-o-lanterns and making our costumes.  Our whole family (plus a friend) dressed as rock stars (that's me in the front).  What a blast!  One of our best costume years, I think (to some of our past costumes, type Halloween into the search box on my blog).  That black lipstick and eyeliner is really hard to wash off, though! 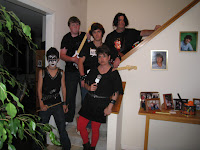 I was a bit tired out from all the activity this weekend but managed pretty well, even going along trick-or-treating to a few neighbors' houses.  Then, Ken and I came back home and let the kids hit the rest of the neighborhood.  I'm a bit worn out today but don't feel crashed.  More importantly, both kids made it to school today.  Lots of fun!

So, it's Monday and that means movies!  Jamie was home sick another 3 days last week (he's doing better now), so he and I saw quite a few.  When he was still so badly crashed last Monday, I went to the library and picked up a stack of old favorites I thought he'd like (we switched from comedies to thrillers this week):
Have you seen any good movies lately?  Hope you had a fun Halloween weekend!
Posted by Sue Jackson at 3:53 PM

Don't worry about the memory lapses I do the same thing. My husband and I make fun of this all the time saying that I get extra milage out of movies and TV shows because I can watch them multiple times before I recoginze them. Just all part of the fun.

Good bunch of movies. If you can find it look for the original Italian Job which is slightly different from the new one but just as good. Michael Cane is in the original and he makes such a good theif.

Try Dr Pernasus' Imaginarium. I just watched it this week adn loved it. I'm going to have to see it again when I'm not as muzzy headed since I couldn't follow some bits of it. Terry Gilliam is the director.

Glad to hear it's not just me! I didn't realize The Italian Job was a remake (it's pretty good, as far as remakes go). We'll have to check out the original - we both like Michael Caine.

Thanks for the recommendations!

Fun, fun, fun! We didn't do much but I still like this time of year. My halloween costume was to put on real clothes instead of the jogging suit I usually wear around the house.

We saw another episode of Caprica. It's patchy in quality of story, but still has an interesting atmosphere. Definitely not for everyone but we seem to be keeping up with the episodes. Other than that I'm reading 'Spook Country' by William Gibson, which is fast-paced and interesting, but not such easy reading as many I've read lately.

Cool! A fellow Gibson fan! I haven't read his stuff in a few years. It tends to be a bit dark but I love his writing.

Haven't watched Caprica yet but it is on my list.

Thanks Baffled! I'll look for the Dresden Files. Spook Country is good but I think would be better without the brain fog, since it's somewhat densely written.