Whew, another hectic, exhausting week and busy weekend. This soccer schedule is killing me - it's the first time my son has played for his school (last fall, he made the freshman team but was then out all season for knee surgery). Every day is either practice or a game, with usually two games a week (3 last week). The games are scheduled for 4:30 or 5:00 and are sometimes as far as an hour away! Whoever came up with the idea of starting a 90-minute game at dinner time was definitely not a mom (or someone with ME/CFS!). 4 pm is a bit early for dinner even for hypoglycemic me, but by 7 pm, I am ready to pass out!  Silly me, I thought I'd have EXTRA time to myself during the fall, with Craig not coming home from practice until 5 pm, but I didn't count on all these game days nor on having to pick him up myself some of the time.

OK, soccer rant is over! It's Monday and that means time to talk about movies. Though we had another set of grandparents visiting this weekend, I did get a few hours to myself to rest Saturday evening when everyone else went to a local college football game. I knew I couldn't manage that, especially the same day as my son's soccer game AND in the evening. So, I took advantage of my quiet time alone to watch a chick flick: 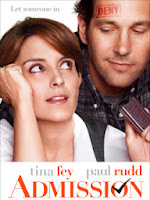 I watched Admission, a romantic comedy starring Tiny Fey as Portia, a Princeton admissions officer. It was perfect for my mood - light, funny, and warm - and better than I expected! Portia is an uptight Princeton representative caught up in her 16th season of reviewing applications from thousands of students (and turning down most of them). She encounters an old classmate, John, played by Paul Rudd, who runs an alternative school and introduces her to Jeremiah, a gifted student who dreams of going to Princeton. Oh, and John thinks that Jeremiah might be Portia's long-lost son that she gave up for adoption! Portia grapples with her very confused feelings while trying to champion Jeremiah in the admissions process, though his background is highly unusual and most of her colleagues think he is not "Princeton material." All the while, she and John are attracted to each other. Some of it is a bit predictable, as I tend to expect rom coms to be, but overall, I really enjoyed it and thought it was high quality. The acting is excellent - you can't miss Lily Tomlin as Portia's outgrown hippie mother!, Fey is both funny and endearing, and there are even a few surprising twists here.

Have you seen any good movies lately?
Posted by Sue Jackson at 4:36 PM