I wanted to resume my Movie Monday feature this week, then Monday quietly slipped by with the holiday weekend and the kids back home - oops! But, Ken and I did have plenty of time for movies this weekend, so here is Movie Tuesday: 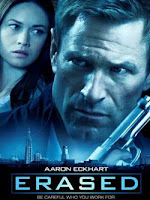 With our oldest son away at college and our younger son invited to the beach with a friend, our weekend began early, on Thursday night, when he left for the beach directly from soccer practice. Ken and I had a quiet dinner for two and then watched Erased, a fast-paced thriller. Aaron Eckhart plays Ben Logan, who, as the movie opens, seems to be a normal single dad living in Belgium with his teen daughter. Ben goes to work one morning at his job as a security specialist and finds his entire place of business has vanished - the rooms are all empty and his co-workers are nowhere to be found. Soon an assassin is after he and his daughter, and they must go on the run while trying to figure out what happened to Ben's company and who wants them dead. As they struggle to stay ahead of the bad guys, Ben's own secrets about his past begin to come to light. This is a typical thriller - action-packed from start to finish with lots of suspense and surprises around every corner. It wasn't a perfect movie but is a good choice if you enjoy action and suspense.

Friday, Ken went golfing after work, and I had a couple of glorious hours to myself (after a long and exhausting day), so I rented a DVD I knew he wouldn't enjoy, Ginger & Rosa. Born on the same day in London, to mothers who are good friends, Ginger and Rosa are inseparable and grow up together. Things become complicated in their teens, though, as they both become involved in anti-nuke groups and Ginger becomes especially scared during the Cuban Missile Crisis. Rosa likes the drama and excitement of the protests and the people involved, while Ginger is truly frightened, with her fears growing as she listens to her radical father, Roland, spout his beliefs. Finally, something happens that tears their friendship apart, against the backdrop of the Missile Crisis. So, yes, this is quite a dark movie (which is why I watched it alone!) about the bonds of friendship amid the 60's anti-war movement. I liked it, though it is definitely a bit of a downer. 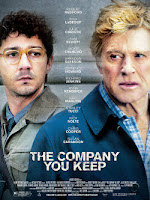 Sunday night, we watched The Company You Keep, starring Robert Redford and Shia LeBeouf, a political thriller which was definitely a two-thumbs-up movie! LeBeouf is a young reporter at a small newspaper in Albany, NY, who latches onto a story about a 30-year fugitive from the FBI's Most Wanted list who is finally caught. The woman, played fabulously by Susan Sarandon, was a member of the infamous Weather Underground, an anti-war group in the 60's that turned to violent means to convey their message. A security guard was killed when four of them robbed a bank, and the FBI has been unable to find any of them for over 30 years. As you've probably guessed already, Redford's character was a member of the same group and must now go on the run in order to protect his young daughter, with the reporter hot on his trail. Ken and I both really enjoyed this one - it's a smart, interesting plot and populated by a raft of top-notch actors. Our only minor complaint was that Redford (who is close to 80 now) and some of the other more mature actors are playing characters who should only be in their 50's - but, hey, it's his movie, right?

Have you seen any good movies lately?
Posted by Sue Jackson at 7:09 PM