Weekly Inspiration 8/9: Everyone Has Challenges 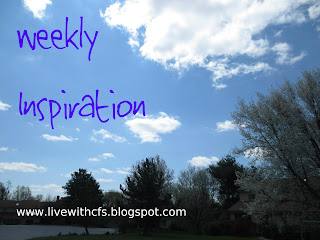 It's been a while since I've been home and able to write a Weekly Inspiration post, so this one is long overdue. I read a lot of books over the past difficult, busy months, so today's inspiration comes from a moving, funny novel that I really enjoyed.

The novel is The Unlikely Pilgrimage of Harold Fry by Rachel Joyce, about a man who hears an old friend is dying of cancer. Harold sets out to mail her a letter and instead just starts walking and decides to walk the whole length of England to deliver his letter to her in person. His journey becomes a quest both physical and emotional. Along the way, he slowly examines feelings and memories long-buried. He also meets a lot of different people along the way. You can read my full review (no spoilers) at my book blog.

Here are two passages that I loved, about how you can never know what another person is dealing with when you first meet them or pass them on the street:

"The silver-haired gentleman was in truth nothing like the man Harold had first imagined him to be. He was a chap like himself, with a unique pain; and yet there would be no knowing that if you passed him on the street, or sat opposite him in a cafe... It must be the same all over England. People were buying milk, or filling their cars with petrol, or even posting letters. And what no one else knew was the appalling weight of the thing they were carrying inside. The inhuman effort it took sometimes to be normal, and a part of things that appeared both easy and everyday. The loneliness of that."

"He had learned that it was the smallness of people that filled him with wonder and tenderness, and the loneliness of that, too. The world was made up of people putting one foot in front of the other; and a life might appear ordinary simply because the person living it had been doing so for a long time. Harold could no longer pass a stranger without acknowledging the truth that everyone was the same, and also unique; and that this was the dilemma of being human."

- The Unlikely Pilgrimage of Harold Fry by Rachel Joyce


I really related to these passages because I had these very same insights during the first years after becoming ill. One thing that living with chronic illness taught me was that everyone in the world was dealing with their own challenges and pains, whether physical or emotional, and that those issues were almost always invisible to the people you interact with every day. ME/CFS isn't the only invisible illness or invisible pain.

I have been surprised over and over through the years to discover that other people were dealing with invisible challenges just like I was: the mom I started chatting with on the soccer sidelines who turned out to have a chronic illness and a teen daughter who was also chronically ill (my own ill teen son sitting next to me at the time), the friend whom I discovered had been quietly struggling with depression her entire life, the woman I met at a book discussion whose husband had been in a terrible accident and was still recovering, the online friend who also lost a parent recently and reached out to me in my grief. It goes on and on.

Learning that everyone in the world has their own hidden challenges and sorrows (and living with my own) has had a transformative effect on me. Living with chronic illness has made me a more compassionate person. Like Harold, I've learned not to judge the people I meet, that we are all the same, doing our best to move through life and deal with our own challenges, whatever those might be.

Has chronic illness changed the way you see other people? What are your own experiences of discovering that others are dealing with their own invisible problems? Do you agree with Harold?