Well, I missed Monday, so this week it's Movie Tuesday! It's not so much that yesterday was Labor Day but that I've been really, really sick this past week and a half with my semi-annual bout of bronchitis. It's a bad one this time, and I am still feeling awful, but I wanted to write these movie reviews.

When my husband went golfing Friday evening, I used the opportunity to watch a movie that had no suspense, action, thriller or sci fi themes! I chose The Spectacular Now, a high school drama/comedy, for my Sue-only movie night. Miles Teller stars as Sutter, a popular high school boy who is dating a similarly popular girl at school. Sutter is well-liked and affable, always joking around and having fun. When his girlfriend breaks up with him, his normally heavy drinking habit veers into extreme territory. He passes out one night on a random lawn and wakes up to see Aimee, a quiet, smart, kind of geeky girl from his school whom he barely knows, staring down at him. Sutter and Aimee, played wonderfully by Shailene Woodley, start hanging out together and begin to get to know each other. They are very different but both struggle with mothers who won't listen. Sutter and Aimee become closer, but Sutter's drinking and his lack of drive about his future begin to get in the way. I love high school dramas (big Gleek here!), and my husband's not so into them, so I really enjoyed this movie. It has the perfect mix of funny moments mixed with serious issues and very realistic problems, and both young actors were excellent, especially Teller as the fun-loving boy who doesn't know what comes after high school.

Saturday night, my husband and I both watched Kingsman: the Secret Service, a freebie from Redbox (though we forgot to return it for 2 nights, so not so free after all!). Colin Firth plays Harry, an undercover agent in a super-secret private spy organization headed up by Arthur, played by Michael Caine. Harry recruits an unlikely young man nicknamed Eggsy, played by Taron Egerton, to try out for an open position in the Kingsman. Eggsy is often in trouble, but his father saved Harry's life, and Harry thinks he has potential. Eggsy is up against some stiff competition for the position, with many of his fellow recruits coming from wealthy families. Since this is a spy movie, it need a super-villain: Richmond Valentine, a high-tech billionaire played by Samuel L. Jackson. The Kingsman and their recruits are trying to stop Valentine from destroying the world (naturally). Sounds like a classic spy movie set-up, right? And it is, except for the odd tone of the movie. It feels like it can't make up its mind whether it is a serious spy thriller or a funny spoof, so it falls somewhere in between. In many scenes, you don't know whether you are supposed to be taking it seriously or laughing at it; the comedy feels kind of awkward. There is plenty of action, and we enjoyed the spy thriller elements and all-star cast, but its attempts at humor fell a bit flat for us. 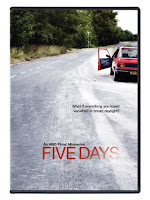 With me sick all weekend, we also watched a lot of TV and enjoyed a mini-series from HBO (originally from BBC and available now on Amazon Prime) called 5 Days, which felt more like a movie than a typical TV show. A woman and her two children go missing at the beginning of the first episode, and the 5 episodes cover 5 different days during the 79-day investigation. It's a crime thriller with an excellent British cast that spends as much time with the lost and frantic family of the victims as it does with the main investigators on the police force, going in-depth with both sets of characters. It's a great mix of drama and suspense that kept us guessing right up until the very end. We found it very compelling and easily watched the whole thing over the course of the weekend - we couldn't wait to find out what would happen next!

Have you seen any good movies lately?
Posted by Sue Jackson at 5:04 PM

I have to complement you on your movie reviews. Though we are in Australia and unlikely to have the same access to most of the movies you mention I just love the tone in which you write them - it's like chatting over a coffee to a friend. Being Ex-pat Brit I'd love to see 5 Days, and will see if I can trace where it might be available to me. Thank you for a very balanced and personal view on Movie Night.

Oh, wow, thanks for the kind words, Kaye! That means a lot to me :) That's just what I was aiming for - a friendly, chatty tone. 5 Days was sooo good - we were totally hooked on it this weekend - made my bad crash more bearable :) Since it appeared on BBC and HBO and is currently on Amazon Prime, I bet you can find it somewhere - good luck!