That sounds like an oxymoron, doesn't it?  Or at the very least, like a really boring and possibly depressing event.  But all of those perceptions are wrong.

Our local CFS parents group got our families together again yesterday for our second gathering, and everyone had a great time!  One family hosted us for an informal potluck dinner; there were five families there, each with one or two kids/teens with CFS (I'm the only ill adult in the group).  We're all getting to know each other pretty well by now, so it was a lot of fun!

I was mentioning our group recently to a mom whose teen daughter has CFS, and she said she didn't really want her daughter interacting with other teens with CFS because she thought it would cause her to focus too much on her illness and might be depressing.  Nothing could be further from the truth! 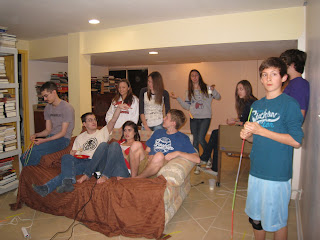 Hanging out with other kids who have CFS is so freeing - they all became instant friends.  I don't think they talk about their illnesses or challenges at all when they're together - they talk and laugh and play games.  Best of all, they feel completely comfortable with each other.  They don't have to feel self-conscious or worry what the others will think if they have to sit down during Frisbee or lie down while playing video games.  There was dairy-free, gluten-free food available.  They understood why Jamie was constantly drinking Gatorade and why many of them attend school only part-time or not at all.  No explanations required.

For some of the kids who are usually isolated at home, this was the only time they've played outside in years and probably the only party they've been to in a long time, too.  The kids threw the Frisbee in the backyard and played video games in the basement.  One mom brought a bunch of flexible glow sticks, and after dark, the kids had a "glow stick war" in the basement.  True, some teens were lying down while they threw their glow sticks at each other, but the sounds of screams and laughter from the basement brought  a lot of smiles to parents' faces.

And the connections formed aren't just fleeting.  After our first gathering in August, the kids all exchanged e-mails with each other.  In between our get-togethers, they're texting each other and interacting on Facebook.  They've formed solid relationships with each other and now know that they can rely on each other, that there is always someone available who understands.

Even though I'm the only adult in the group with CFS, I feel similarly comfortable with this group - they all understand why I can't stand much, why I'm constantly drinking water, why by 8 pm, I was exhausted.

I know I've said this here before, but if you have a chance to meet other people with CFS, you should try to do it, even if the exertion might result in a few days of rest afterward.  It's just so liberating to be with other people who instantly "get it," who require no explanation.  Just as all of you that I've met online have enriched my life and made me feel less isolated, meeting all these other families dealing with CFS has made all of us feel less alone.  Our focus has been on social events (which has been great!), but along the way, we're also providing support for each other.  It takes a village, right?

On the way home last night, Jamie said, "I wish we could do that every week!"
Posted by Sue Jackson at 1:28 PM

This sounds really great! What a relief to have people around who understand. We tried starting a support meeting here but so often one of us (or all of us) were too sick the day of the meeting so it fell appart. I can't imagine what it would be like to grow up with this awful illness. I'm so glad that these kids have support - from peers as well as parents.

This is so great for all the kids who have CFS! I never ceases to amaze me how many do have it though....we never know what goes on behind the curtains in our homes, do we...How wonderful they are able to be with others who really truly get it.

This is such a great idea. So many good things come out of events like this.

That is wonderful! I wish I could find a group like that nearby. (I don't wish for others to be sick, but it would be great to be able to connect like that.)

Thank you for sharing! I’m new to the blogging world and I just found your blog last night and it is VERY encouraging to me.