My family has been totally wrapped up in TV series lately, so we haven't watched any movies in weeks. But Saturday night, with my husband out of town and my son occupied with two friends sleeping over, I finally had time for a movie! I browsed through the free choices on Amazon Prime and found a good one: 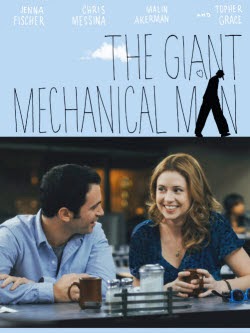 I watched The Giant Mechanical Man, a romantic comedy. I know the name sounds silly, but it was actually a very good movie! Chris Messina stars as Tim, the title character, one of those guys who paints himself silver and stands on the street pretending to be a robot (something that fascinated my kids on their first visit to New Orleans!). He's going through some tough times when his girlfriend leaves him and he begins to question his unique art form. The other main character is Janice, played by Jenna Fischer of The Office fame, who is similarly at a low point in her life. She was fired from her mediocre job as a temp employee and forced to move in with her pushy little sister (played by Malin Akerman from The Trophy Wife). Her sister wants to fix her up with a self-help guru who thinks a little too much of himself, played hilariously by Topher Grace from That 70's Show (I didn't recognize him at first with the long, hippie hair). Janice and Tim meet when they both get demeaning jobs at the local zoo, and Janice has seen Tim on the streets as the Mechanical Man, though she doesn't realize it's him. I really enjoyed this movie from start to finish. It is warm and funny and has more depth than the typical rom-com.

Have you seen any good movies lately? I may need another suggestion for weeknights this week until my husband gets home!
Posted by Sue Jackson at 7:11 PM

I was going to watch this but I had never heard of it, I will give it a go now :) Juno is good and I saw No Reservations for the millionth time the other day - they are both more than your typical Chick Flick/RomCom :)

I agree, Amy! I loved both of those movies :)