I continued to battle the yeast demons last week but finally started to feel a bit better on Thursday, after 3 full weeks on antifungals. Not quite out of the woods yet but getting better and slowly returning to my own normal.

We had a mostly quiet weekend here, though we did manage to get out for dinner Saturday night and then got a DVD to watch: 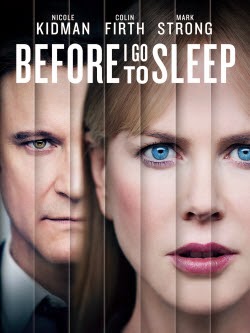 I was very excited to see Before I Go To Sleep at Redbox! We both read the book and loved it (here's my book review), so we've been wanting to see the movie since its (too brief) theater release. Its release was mostly overlooked last year with all the buzz about Gone Girl at the same time, though I much preferred Before I Go To Sleep when I read both books. The movie adaptation was well done.

Nicole Kidman stars as Chris, a 40-year old woman with a type of amnesia where she can only retain 24 hours of memories. Whenever she goes to sleep, her recent memories, before the age of her mid-20's, are wiped clean (this type of amnesia really does exist, as described by Oliver Sacks in his book Musicophilia). So, she wakes up every morning thinking she is in her mid-20's and having no recollection of her husband who is asleep in the bed next to her. Her husband, Ben (played by Colin Firth), has covered the wall of their bathroom with photos of the two of them and their life together and Post-its reminding her of the important details of their lives. Every morning, she wakes up terrified, and he calms her down and patiently explains that he is her husband and that she had an accident and lost her memory. It's a frightening, yet repetitive routine. Every day is pretty much the same until Chris starts seeing a therapist who gives her a camera to make a video journal each night before bed to help her remember things. With the help of the camera and the therapist, Chris begins to remember things, but nothing makes sense to her.

This is an exciting thriller based on a unique premise. The movie does a great job of putting the viewer inside Chris' perspective so that you don't know who to trust or what to believe, and the tension mounts as Chris slowly begins to put some of the pieces together. A few details were different than the book, but the movie sticks pretty closely to it in most respects. We both enjoyed it.

Have you seen any good movies lately?
Posted by Sue Jackson at 4:54 PM

Thanks for this review. I didn't see the movie, but I will see if I can find it on DVD.