My husband was out of town all last week and then got stranded in Texas for the weekend, too, due to the snowstorm here, so I watched two movies on my own (and also got hooked on The Gilmore Girls!): 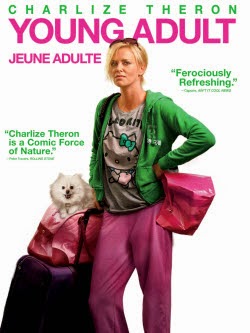 I watched Young Adult, starring Charlize Theron as Mavis, a 30-something divorced author of YA novels. Mavis is clearly unhappy with her life, barely going through the motions and spending a lot of time either drunk or hungover and/or sleeping with strangers. When a baby announcement arrives from her high school sweetheart, Buddy, she gets it in her mind that the answer to all her problems lies in simply winning Buddy back. She heads back to her small hometown, intent on reviving their old romance. Since Buddy is now married and has a newborn daughter, things don't quite go as Mavis planned. While basically stalking Buddy, she runs into another former classmate, Matt, who was permanently disabled by some bullies in high school. This movie was billed as a comedy, but I found it pretty depressing. True, Mavis does make a fool of herself going after Buddy and being stuck in her popular girl high school persona when everyone else seems to have moved on, but it all felt more uncomfortable and cringe-worthy to me rather than funny. Supposedly, it's a dark comedy, but it seemed kind of tragic to me. The movie is very well-done, however, with a good script and acting. It just wasn't my cup of tea.

Chef, in contrast, is an uplifting and thoroughly enjoyable movie about food, family, fatherhood, and friendship. Jon Favreau stars as Carl, the accomplished and talented chef of the title, who is stuck under the thumb of an overbearing restaurant owner, played by Dustin Hoffman. John Leguizamo plays Carl's loyal line cook and enthusiastic best friend. Carl's life seems to be falling apart, as his ex-wife, Inez (played by Sofia Vergara), urges him to spend more time with his son, Percy, and leave the restaurant. She wants him to open a food truck, supplied by her first ex-husband, a quirky guy played by Robert Downey, Jr. Fed up and with few options, he finally gives into the food truck idea, and the whole family heads to Miami to pick it up. 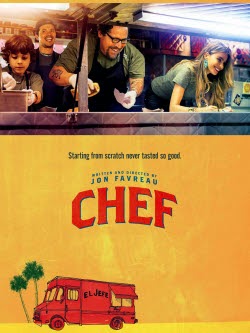 The food porn in this movie is amazing! My mouth was watering, and the grilled cheese scene alone just about killed me (I'm dairy intolerant and miss cheese so much!). But this is far more than a movie about food - it is also filled with great music, family drama, humor, and one of the best road trip scenes ever. They drive the food truck cross-country, from Miami to L.A., in scenes filled with mouth-watering food, foot-tapping music, and a lot of fun. The scenes in New Orleans made me home sick. This film is well-written, beautifully produced, and filled to the brim with excellent performances by great actors. All in all, this is a gem of a movie, filled with joy, and I loved every minute of it. It is guaranteed to put a smile on your face, and those amazing cooking scenes inspired me to get back in the kitchen and get more creative this week!

I almost forgot...I actually went to the movie THEATER to see a movie on the big screen last week! My annual movie venture. A friend and I enjoyed a rare evening out, with dinner and a movie. We saw Still Alice, which is based on a wonderful novel by Lisa Genova. Julianne Moore stars as Alice, a 50-year old world-renowned linguistics professor at Columbia University (though in the book she worked at Harvard) who develops early-onset Alzheimer's disease. She is married - Alec Baldwin plays her husband - with two grown daughters and a grown son. To make matters worse, the kind of Alzheimer's she has is genetic, so her children are also at risk. The movie follows Alice from her first inklings that something might be wrong through her diagnosis and her very quick decline. The movie was just as good as the book, and Julianne Moore really earned her Best Actress Oscar. I cried so hard at one point - while Alice is giving a heartfelt speech during her decline at an Alzheimer's convention - that I actually floated my contact lens right out of my eye and had to run to the restroom to get it back in! Although it is heart-breaking, this movie is also about life and love and the strength of the human spirit. Any movie that can make you feel that much is a winner in my book.

Have you seen any good movies lately?
Posted by Sue Jackson at 6:30 PM

Still Alice is one of my favorite books so I must see the movie. I'm glad to hear it's as good as the book! My husband and I watched Chef recently and enjoyed that as well.

Thank you for joining the Sunday Small victories linkup