Yes, it is Movie Monday, but more importantly....it's Jamie's 16th birthday!!!  Sixteen years ago today, I was lying in the hospital shivering uncontrollably after a c-section preceded by 26 hours of labor!  Good times...ha ha

Seriously, I have 16 years of wonderful memories.  Jamie is a joy - sweet, caring, funny, and lots of fun to be around.  I just can't believe how quickly the time has gone by. 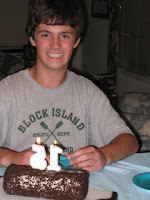 Now, onto the movies!  We made up for lost time this week and watched a LOT of movies...
Whew!  I told you we watched a lot of movies!  That's the fun of summer, with no homework or soccer practice or school events in the evenings.

Have you seen any good movies lately?
Posted by Sue Jackson at 11:48 AM

The only one I've seen on your list is Enchanted, which I loved. I'll have to look into some of the other movies you watched. And happy birthday, Jamie!

We watched the Time Traveler's Wife, which I liked but thought the plot could use some more development ... was a little flat compared to the book.

I have Marley & Me waiting on the DVD player ... I loved the book so am looking forward to that one, too! Your review makes me want to watch it even more! Maybe this afternoon ...

The Painted Veil sounds so good from your description that I immediately added it to my Netflix list.

Loved the movie Marley and Me and also the Terminal. Have not seen the others..You were very busy with the TV!!! We rented Leap Year via RedBox and that was okay.....
Great looking son you have!

Congratulations and Happy Birthday to Jamie! He must be excited to reach driving age.