Sooooo glad it's Monday - the house is (relatively) quiet, the boys and I are alone, and there is nothing at all scheduled this week - not even a doctor's appointment. 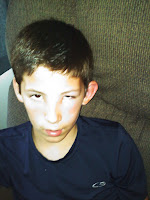 We had one more mishap last week - Craig got stung by yellowjackets on Friday.  This is not usually a big deal for him (he's not allergic like Jamie is), but two of the stings were near his eye and on his ear, and those swelled up HUGE!  Check out this gruesome picture.  By Saturday morning, his eye and ear were horribly swollen  - just exactly as Jamie's eye was two weeks ago when he got stung in the same spot!  So, we were back at the doctor's office.  She put Craig on steroids and antibiotics - she said you have to be extra cautious so close to the eye (and the brain).

The rest of the weekend was nice.  We enjoyed having my Dad and his wife here, but by Sunday evening I was totally wiped out!  I think the miniature golf yesterday and also making dinner were just too much time on my feet.  They left this morning and so did Ken for a business trip to Texas.  I have a quiet, easy, restful week planned.

So, we didn't have much time for movies last week:
I need to make a run to the library and pick up a few good girly movies for myself this week, with Ken gone.  Any suggestions?

Have you seen any good movies lately?
Posted by Sue Jackson at 12:35 PM

I'm keen to catch The Mentalist after getting hooked on The Guardian which shows at six o'clock over here, just when I'm sitting down with some crochet having put the dinner in the oven.
Nasty sting, poor Craig. A yellowjacket is a wasp right? They smart!

I think you'd like The Mentalist, Jo. Yes, yellow jackets are a particularly aggressive kind of wasp with very strong venom. Their worst season is really just beginning and runs through the fall here. These are the type that caused Jamie to have an anaphylactic reaction several years ago. Fortunately, Ken found the nest Saturday and sprayed it, but I'm sure there'll be more. Nasty buggers!

Poor fella! Geez, you can bribe the boy with that in a few years. :)

Last week I watched Remember Me with Robert Pattinson. Was TOTALLY shocked. It was great but I cried like a baby. Won't tell you more than that cause if you haven't seen it, you do NOT want a spoiler. If you haven't, you must watch it - but not with the kids.

So funny - I just requested Remember Me from the library today! Annie also recommended it but said it was sad, so I figured it was a good one to watch while Ken is out of town - he doesn't like sad movies!

Ouch! That looks like it hurts! Poor Craig! I personally do not like bees of any kind. I hope Craig is feeling better soon and that swelling resolves.

Hoping and praying this week is a much quieter one all the way around!